10 Young People Who Are Changing the Food System 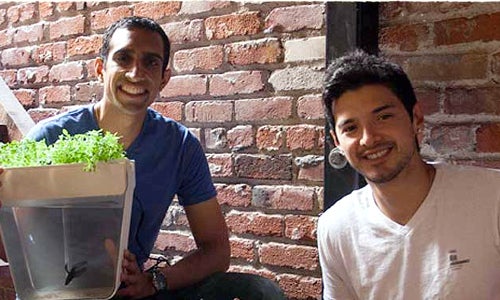 Innovations in agriculture don’t just come from veteran environmentalists or food industry heavyweights. In fact, many incredibly inspiring projects are the creations of youth and young people around the world. Food Tank is excited to highlight 10 young foodies who make us more hopeful about the future. 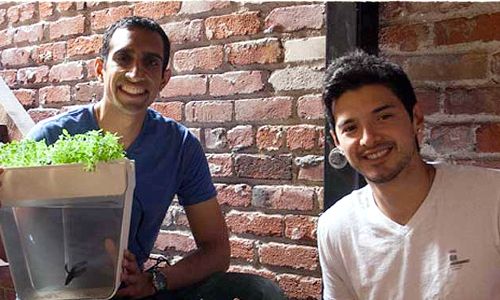 Back to the Roots founders Nikhil Arora and Alex Velez.

1-2. Nikhil Arora and Alex Velez, 26 and 27, on the precipice of their graduation from the University of California, Berkeley in 2009, turned down offers to enter the world of consulting and investment banking to pursue mushrooms. The pair had been experimenting with growing mushrooms on coffee grounds, and after a successful bucket of oyster mushrooms, they knew they had discovered a big opportunity. Oakland-based Back to the Roots was born, and, now five-years-old, its two main products are mushroom kits, which can grow mushrooms directly out of a cardboard box, and AquaFarm, a self-cleaning fish tank that uses the fishes’ waste to grow food. As declared on their website, “our mission is to make food personal again through the passionate development of tools that educate and inspire, one family at a time.”

3. Nicky Bronner, 17, has a sweet tooth, but found himself butting heads with his parents, who didn’t want him filling up on processed candies and junk foods. Unwilling to sacrifice peanut butter cups and chocolate bars, Bronner, then 13, worked with his father to found Unreal Foods, whose candies are made with real ingredients: no preservatives, grass-fed dairy, no corn syrup, gluten free and fair trade cocoa. The products have made their way from the Bronners’ home outside Boston, MA to big name grocery stores, and can be purchased throughout the U.S. at Target, Kroger and Wegman’s, just to name a few.

4. Tyson Gersh, 25, is owner and founder of the Michigan Urban Farming Initiative (MUFI), a nonprofit organization dedicated to engaging community members in sustainable agriculture on vacant plots of land, providing people with nutritious food, while making the community more conscientious about where their food comes from. Gersh, who graduated from the University of Michigan-Dearborn this year, is now head of an organization that boasts 2,500 volunteers and grew more than 10,000 pounds of produce this year alone. “Using agriculture as a platform to promote education, sustainability and community—while simultaneously reducing socioeconomic disparity—we hope to empower urban communities,” MUFI’s website reads.

5-6. Eve and Liam Knight, 12 and 13, are better known as the Spice Kidz. The duo moved from Ireland to Pensacola, FL and was disappointed by the lack of curry, which is widespread across the British Isles. Rather than settle for less curry in their diets, Eve and Liam decided to introduce an easy-to-use spice packet (inspired by a similar product in Ireland) to Americans, allowing them to create easy and nutritious meals. The pair won an entrepreneurship competition at the Young Entrepreneur’s Academy of Greater Pensacola, and their product is being sold at a local store. “We want everyone in America to have curry for dinner,” Eve said. “And we want them to have it once a week.”

7. Emily Meko, 23, is founder and owner of Eat What’s Good, a vegan and gluten-free vendor of packaged and prepared foods, consulting services, meal planning, catering and menu development. The Ontario resident, a culinary student who has also studied food science and human nutrition, hopes to get people excited about organic, healthy, food. “It’s where healthy meets delicious, and getting away from the idea that healthy food has to taste institutionalized and boring,” she said. Meko’s products are already featured at a nearby wellness clinic as well as a yoga studio, and she hopes the reach of her healthy eats will continue to expand.

8. Benedict Mundele, 20, founded Surprise Tropicale, a food take-away and catering business, the idea for which she developed when she was in high school. The Democratic Republic of Congo resident started off by giving free breakfasts to members of the Kuvuna Foundation, an organization dedicated to sustainable development, leadership development and support for entrepreneurs. Mundele, who is studying social communication at the Catholic University of Congo, said that although her country has plenty of fresh food, it is often exported, processed, imported again and sold at higher prices. She wants to keep the DRC’s fresh food fresh, and hopes to soon supply her foods to local supermarkets. Mundele is a World Economic Forum Global Shaper and will attend the World Economic Forum on Africa in Nigeria this year.

9. Ben Simon, 24, is executive director and one of the founders of the Food Recovery Network (FRN), a network of college chapters whose mission is simple: direct surplus food from their campuses to hungry Americans instead of landfills. The University of Maryland graduate started the program with several other students, and three years later, the organization boasts more than 95 chapters across 26 U.S. states, Washington D.C. and Puerto Rico. Since 2011, FRN has donated more than 400,000 pounds of food, and Simon was awarded US$10,000 by the Do Something campaign in 2013 to further FRN’s goals. FRN hopes to be on 150 campuses and to have donated 610,000 pounds of food by May 2015. “An amazing amount of food gets thrown into a trash can,” Simon said. “It evokes a very innate response to jump into action.”

10. Remmi Smith, 14, has launched an online cooking show and a spin-off, published a cookbook and had her products sold at Whole Foods—all before starting high school. The Tulsa, OK resident said her passion for food and cooking was sparked by the childhood obesity epidemic, and she hopes to inspire other kids to experiment with nutritious, tasty foods. Smith is also Sodexo’s student health and nutrition ambassador, participant in the Future Chefs program, and has given cooking demonstrations in front of Congress and the National School Board Association.