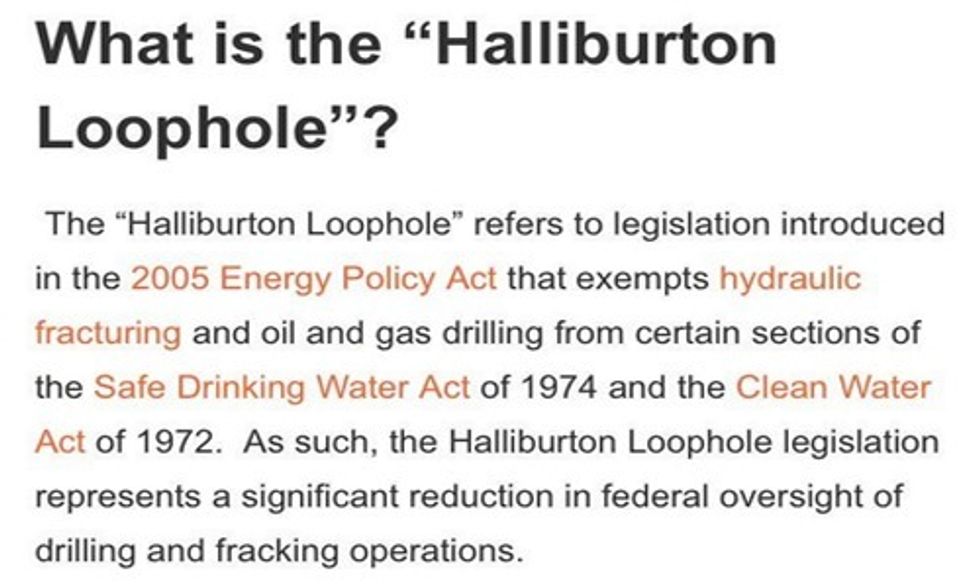 This past Saturday, marked a notable 10th anniversary. But it was certainly nothing to celebrate. Ten years ago, President George W. Bush signed the Energy Policy Act of 2005. The giant energy bill included massive giveaways for the fossil fuel, nuclear and ethanol industries and provided only token incentives for renewables and improved energy efficiency. But the most infamous piece of the law was what is now commonly known as the “Halliburton Loophole,” an egregious regulatory exemption that ushered in the disastrous era of widespread oil and gas fracking that currently grips our nation.

Fracking—the extreme oil and gas extraction method that involves blasting millions of gallons of water mixed with toxic chemicals underground at enormous pressures to break apart subterranean rock—has exploded in the last decade. More than 270,000 wells have been fracked in 25 states throughout the nation. More than 10 million Americans live within a mile of a fracking site. This means that 10 million Americans—and truly many more—have been placed directly in harm’s way. Hundreds of peer-reviewed studies have connected fracking to serious human health effects, including cancer, asthma and birth defects.

For this we can thank the Energy Policy Act of 2005, the law that holds the Halliburton Loophole. Named after Dick Cheney and the notorious corporation he led before becoming vice president, the law (championed by Cheney and disgraced Enron founder Kenneth Lay, among others) explicitly exempted fracking operations from key provisions of the Safe Drinking Water Act. These exemptions from one of America’s most fundamental environmental protection laws provided the oil and gas industry the immunity it required to develop a highly polluting process on a grand national scale.

One of the most troubling repercussions is how fracking companies hide the contents of their toxic water and chemical solutions pumped into the ground. Contamination of underground drinking water sources from fracking fluids is a glaring threat to public health and safety. Yet even doctors responding to fracking-related health complaints can’t access data on what particular chemicals their patients may have been exposed to.

But the Halliburton Loophole wasn’t the only fracking enabler in the Energy Policy Act. The act granted the Federal Energy Regulatory Commission (FERC) sweeping new authority to supersede state and local decision-making with regard to the citing of fracked gas pipelines and infrastructure. It also shifted to FERC industry oversight and compliance responsibility for the National Environmental Policy Act of 1969, another key law. This was akin to putting the fox in charge of the hen house.

As it stands, FERC is entirely unaccountable to public will. It is unaccountable to Congress and even the White House. Commissioners are appointed to five-year terms and can do as they please. Until a law reigning in FERC is passed, the commission will continue to act as a rubber-stamp for the fossil fuel industry.

Additionally, the Energy Policy Act repealed an important anti-monopoly law, the Public Utility Holding Company Act of 1935 (PUHCA). PUHCA safeguarded consumers from the overreach of the oil and gas industry and banks that did business with those companies. It prevented the formation of giant state and regional energy cartels that could manipulate energy costs, engage in profiteering and exert undue influence over political debate. The Energy Policy Act transferred most of this oversight to FERC. Since then, the largest American energy companies have grown significantly more powerful and spent almost a billion dollars on federal lobbying, according to OpenSecrets.org.

The 10th anniversary of the Energy Policy Act is indeed a sad occasion, but it provides us with a ripe opportunity to reexamine our nation’s disastrous policy of doubling-down on fossil fuels over the last decade, thanks to the extreme process of fracking. For the sake of countless Americans who are currently suffering health effects caused by fracking and the countless more who will suffer in the future, we must immediately curtail our dependence on oil and gas and turn decisively toward a truly clean, renewable energy future.