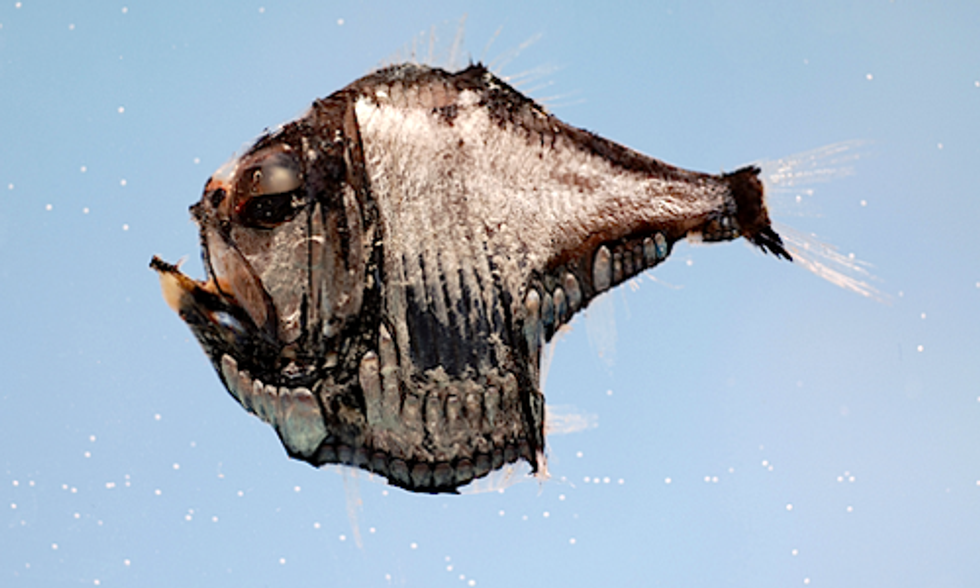 The Gulf of Mexico is home to more than 15,420 species—from the coastal estuaries to the deep sea floor, the biodiversity of the Gulf is astonishing. To highlight this diversity we thought that it would be fun to introduce you to some of the not-so-common, and less recognizable species that reside in our big backyard. Here are our top 10…

We typically think of orcas living in colder climates, but about 500 orcas live in the Gulf of Mexico where they feed on tuna and even dolphins in the Gulf’s deep waters, typically far from land. It is believed that these “killer whales” also used to feed on Caribbean monk seals, which went extinct in the 1950s.

Also known as the “lovely hatchetfish,” this opportunistic feeder’s diet consists of everything from copepods to other fish. This fish traverses deep sea waters by making daily trips up and then back down the water column, but what makes this fish really cool is what it does in the Gulf’s dark, cold waters. It has a unique ability to bioluminesce via glowing photophores, a technique used to attract prey close enough to capture without expending too much energy.

These graceful gliders might resemble an ordinary slug … until you see them soar through seagrass beds in coastal estuaries of the Gulf. You are most likely to catch a glimpse snorkeling around rocky intertidal habitats covered in marine algae, which they are known to feed on. When frightened or feel that they are being threatened, they emit a cloud of dark ink into the waters around them to deter and confuse predators.

No, someone has not stepped on this poor fish, but rather this is the way it naturally occurs in the wild. This fish uses its foot-like fins, complete with an elbow, to push off the sea floor. Flapping its tail, it swiftly hops across the sand like a frog. This fish also sports a long nose that can project a lure to entice other critters closer to its mouth, thought they better be small, as this fish is only a couple of inches long.

Known as the ocean’s most ferocious predator, great whites occasionally pass through the Gulf but they are most likely to stay in its deeper, cooler waters. However, when the temperature in the Gulf plummets to 60 degrees or lower, the large sharks can move into coastal waters, usually 20 miles or more offshore. Just remember, if you catch one you must let it go, the species has been federally protected since 2004.

It’s a bird! It’s a fish! No, it’s a searobin! At least 12 species of searobins inhabit Gulf of Mexico waters. The bighead searobin is the largest, most common, and the only one to inhabit lakes and estuaries, as well as nearshore waters. Not only can these beautiful fish glide through the water with ease using their "wings", but they can also use the elongated rays of their pelvic fins to ‘walk’ on the bottom while searching for the worms and small shrimp that they eat, especially in sandy seagrass habitats.

Also known as the “Vampire Squid from Hell”, this living fossil has seen very little change since it first appeared on Earth more than 300 million years ago. Living more than half a mile deep in the Gulf’s dark waters, this cephalopod has unique defense mechanisms, including the ability to turn itself inside out. It also has bioluminescent points on its tentacles that give the appearance of false eyes, keeping predators away from the sensitive head region.

This strange-looking fish lives among a unique habitat, Sargassum seaweed, with which it blends in perfectly. The fish blends in perfectly on its floating habitat as it traverses the Gulf of Mexico, often ending up in the sheltered estuaries. The fish can also change color quite rapidly, from light to dark and back again. The sargassum fish is a voracious ambush predator that is a known cannibal. An anglerfish, it dangles its esca (similar to a fishing lure) to attract small fish, shrimps, and other invertebrates. It is able to dart forward to grab its prey by expelling water forcibly through its gill openings.

The venomous lionfish, native to the Indo-Pacific region, are highly invasive, rapid breeders, and opportunistic predators. Fishery scientists are concerned that lionfish, having no natural enemies, may adversely impact natural fish populations. Since 2000, lionfish have been observed primarily by scuba divers in reefs along the southeast coast of the U.S. and northern Caribbean, but recently the species has made its way all the way to the Texas coast.

This native turtle has one of the largest ranges of all turtles in North America, stretching as far south as Florida Keys and as far north as Cape Cod, calling the brackish coastal swamps of the eastern and southern United States home. Terrapins look much like their freshwater relatives, but are well adapted to the near shore marine environment. They have several adaptations that allow them to survive in varying salinities, including skin largely impermeable to salt water and lachrymal salt glands used primarily when dehydrated.