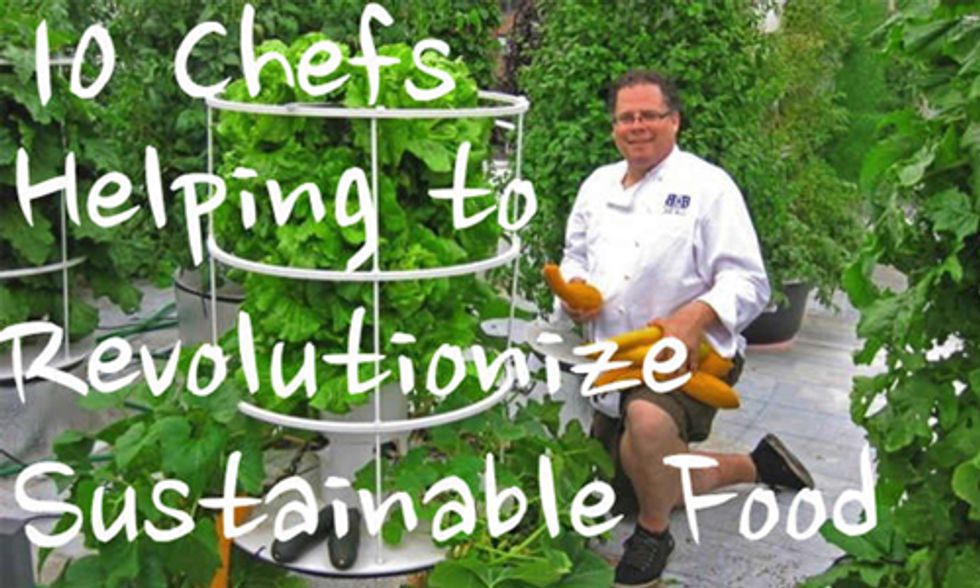 In the food service industry, the distance between the soil and the plate has been steadily dwindling. Chefs prefer locally sourced ingredients for their flavor and freshness and consumers recognize the advantage of knowing where their food came from. Farm-to-table operations are helping to repair our food system by drastically reducing food miles and creating a market for local food producers who are more likely to employ sustainable farming practices.

Food Tank recognizes ten chefs who are working to eliminate the farm-to-plate gap by growing their own food.

Executive chef at Capitol Grill in the historic Hermitage Hotel in Nashville, Tennessee. Brown grows vegetables for the restaurant on his own property and on plots at nearby Glen Leven Farm. More recently the hotel purchased Double H Farms, a 250-acre cattle operation. There, Brown manages more than 100 heads of Red Poll cattle for both dairy products and grass fed beef.

Proprietor of Blackberry Farm in Walland, Tennessee, Beall oversees this Smoky Mountains getaway where his celebrated cuisine is prepared with produce from their garden. The venue hosts weddings and other events. The garden also serves to preserve historic heirlooms and educate guests on the importance of historic crop diversity.

The farm-to-table philosophy is second nature to McClelland, chef and proprietor of L’Espalier in Boston, Massachusetts, having grown up on his grandparents' farm in New Hampshire. In 2009, he opened Apple Street Farm and now produces everything from herbs and vegetables to meat and honey. In addition to supplying the restaurant with these products, the farm also functions as a CSA (community supported agriculture) with produce and poultry shares available.

A James Beard Foundation award winner, Kelly is executive chef and proprietor of Primo in Rockland, Maine. Graduating first in her class at the Culinary Institute of America, she opened Primo in 2000, which included a greenhouse, a two-acre garden, and two pigs. Now the four acres include vegetables, several poultry breeds, and nine pigs that supply the restaurant with about 80 percent of its products at the height of the season.

Skokan and his wife opened Black Cat Farm to Table Bistro in Boulder, Colorado in 2009. Black Cat Farm is 130 acres, produces a diverse array of fruits and vegetables, and is home to hundreds of animals including sheep, pigs, chickens, ducks, and turkeys. In addition to supplying Black Cat with products, the farm now also supplies Bramble and Hare, which the Skokans opened in 2012. In addition to these two locations, one can enjoy the carefully grown heirloom products of Black Cat farm through CSA shares or at Boulder Farmers’ Market.

Pelaccio is a well-known New York City chef and founder of the Malaysian inspired Fatty Crab empire. Recently, Pelaccio moved upstate to Hudson, New York and opened Fish and Game. This new restaurant is inspired by the agricultural roots of the Hudson Valley as evidenced by Fish and Game Farm, just down the road from the restaurant. They produce vegetables, raise free-range chickens and honeybees, and tap their own maple trees for syrup.

Marquis earned his position as executive chef at Epic Restaurant in Chicago, Illinois through his participation on the Food Network’s reality TV show Chef Hunter. Marquis’ experience with local ingredients from central Illinois led him to purchase Mill Road Farms, a 20 acre farm in Sheffield, Illinois. The property includes a garden, greenhouse, and will have livestock in the next year. It yields herbs, organic produce, charcuterie, cheeses and honey, produced specifically for the menu at Epic.

Garces is perhaps the most recognizable name on our list with nine Iron Chef victories under his belt, a James Beard Foundation award, and fifteen restaurants included in his empire. He recently purchased Luna Farms, a 40-acre property in Bucks County, Pennsylvania. He now produces fruit, vegetables, eggs and honey at Luna Farms for his ten east coast locations in Philadelphia, New Jersey, and Washington DC.

Copple cultivated his respect for and interest in locally sourced ingredients at butcher shops and well respected restaurants in New York to Kansas City. As Executive Chef at The Yardley Inn in Bucks County Pennsylvania, just north of Philadelphia, Copple founded the Riverside Kitchen Garden on location at the restaurant and a small farming operation just down the road. The herbs, fruits, and vegetables that he grows inspire his menu.

Is Agave Nectar Worse Than Sugar?

6 Reasons Chia Seeds Should Be Part of Your Daily Diet