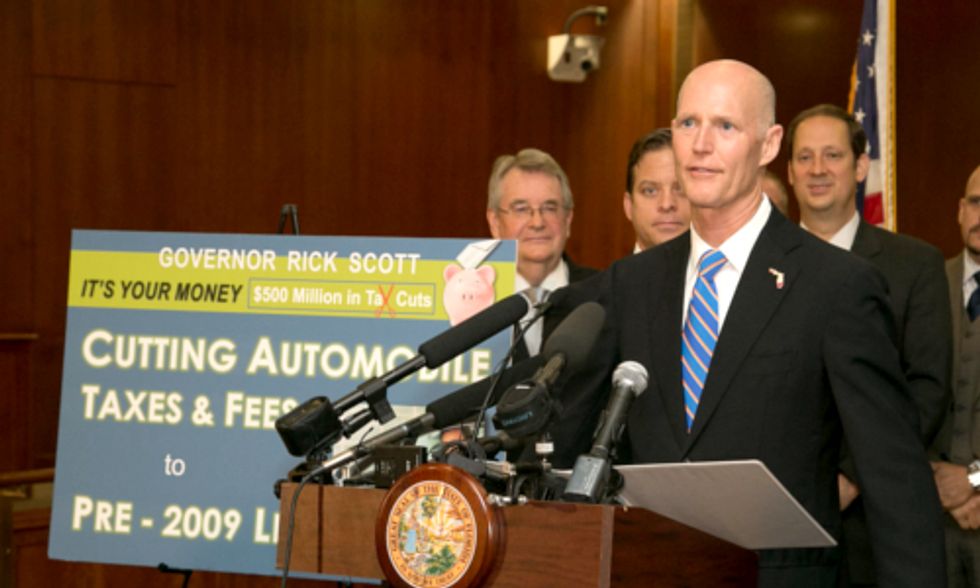 The "I'm not a scientist" excuse won't fly with this group.

Ten scientists signed a letter addressed to Florida Gov. Rick Scott this week in hopes that he will meet with them to learn about climate change and its impact on their state. The scientists are professors of oceanography, environmental and atmospheric sciences and more at various universities in the state, including Miami, Florida State, Florida International and Eckerd College, the Tampa Bay Times reported.

"Florida is one of the most vulnerable places in the country with respect to climate change, with southeastern Florida of particular concern," the scientists wrote. "This is not a hypothetical. Thousands of scientists have studied the issue from a variety of angles and disciplines over many decades.

"Those of us signing this letter have spent hundreds of years combined studying this problem, not from any partisan political perspective, but as scientists—seekers of evidence and explanations."

While direct, the letter doesn't attack Scott for what he doesn't know. As one of the scientists, Jeff Chanton of Florida State University, told the Times, "this is about the continued comfort and amiability of civilization, or human beings. I just want him to understand what the situation is—and put it in a historical, million-year context, about what the greenhouse gas history is."

His response will be important for his political career as well as the environment. In November, Scott faces former Gov. Charlie Crist, who is known for his climate policies, though state legislators have repealed most of them. Crist attends and speaks at events like this year's Solar Uprising Rally, which was presented by the Southern Alliance for Clean Energy.

View the letter's full text and signees on the next page.

We respectfully request the opportunity to meet with you to discuss the current and future impact of human-induced global warming on Florida. As scientists, we believe such information is vital given the threat posed by climate change. There is a clear need to develop a state plan to both mitigate and adapt to the threats to Florida's communities, businesses, tourism industry and protect the state's economic well being.

We note you have been asked several times about how, as Governor, you will handle the issue of climate change. You responded that you were "not a scientist." We are scientists and we would like the opportunity to explain what is at stake for our state.

We welcome the chance to present you with the latest climate science. Our hope is this will inform you as you consider Florida's plan for meeting the recently announced carbon pollution standards from the US Environmental Protection Agency (EPA). Each state will be called on to implement reductions with Florida's carbon intensity rate reduction target of 38 percent by 2030, from 2012 levels.

We will also respond to any questions you might have regarding the recent National Climate Assessment (NCA) and any adaptation planning decisions you may be considering. That report, as you may be aware, concluded that climate change "is already affecting the American people in far-reaching ways." This includes more frequent and/or intense extreme weather events, more acidic oceans and rising sea levels. The report further found "unambiguous" evidence that human activities—the burning of fossil fuels, the clearing of forests—are the cause. The NCA also found we are "exceptionally vulnerable to sea level rise, extreme heat events and decreased water availability" caused by climate change, with "residents in some areas such as Miami Beach [already] experiencing seawater flooding their streets."

In short, Florida is one of the most vulnerable places in the country with respect to climate change, with southeastern Florida of particular concern.

This is not a hypothetical. Thousands of scientists have studied the issue from a variety of angles and disciplines over many decades. Those of us signing this letter have spent hundreds of years combined studying this problem, not from any partisan political perspective, but as scientists—seekers of evidence and explanations. As a result, we feel uniquely qualified to assist you in understanding what's already happening in the climate system so you may make the most effective decisions about what must be done to protect the state, including reducing emissions from fossil fuel burning power plants.

It is crucial for policymakers, such as yourself, to have a full understanding of the current and future threats to Florida. Most importantly, you should have a detailed understanding of the specific climate change impacts already affecting Florida to help you formulate the optimal plans for mitigating future impacts, while simultaneously preparing Florida's communities and businesses for the changes already underway and almost certain to accelerate in coming years.

We look forward to meeting with you and await your response.