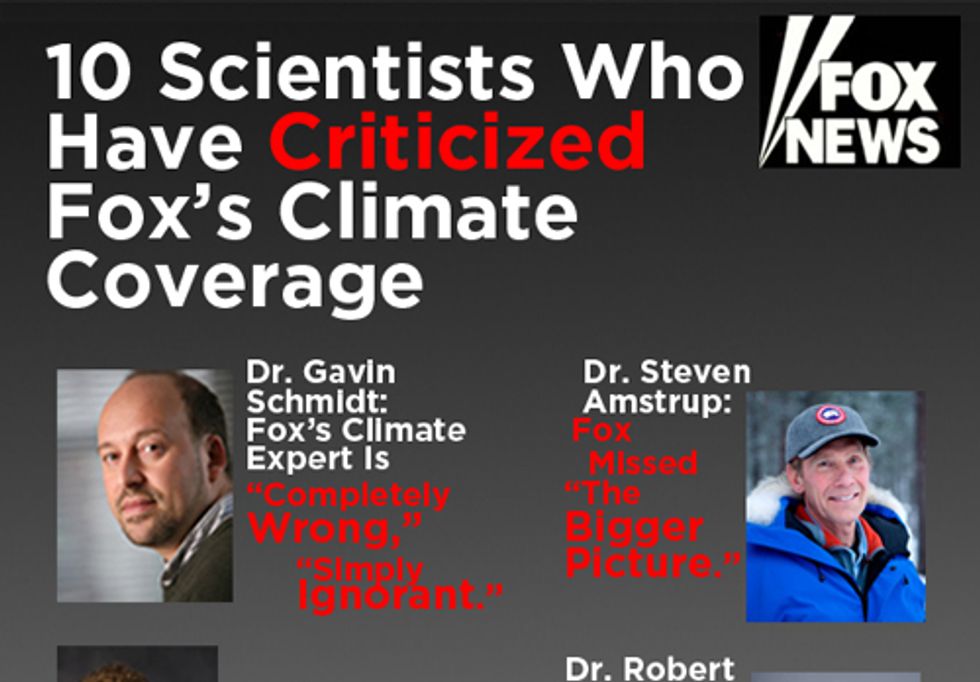 Last summer, Fox News hosted global warming "expert" Joe Bastardi to claim that the human-induced climate change contradicts the 1st law of thermodynamics and Le Chatelier's Principle. Duke University scientist William Chameides called Bastardi's claims "utter nonsense," and the University of Chicago's David Archer said Fox is "wrong" to suggest that these basic principles negate the risks of climate change. Richard Muller, a physics professor at the University of California, Berkeley, agreed that Bastardi's claims are "completely wrong," adding that "even skeptics of global warming, if they know physics, would disagree with him." Even Judith Curry, a climatologist at the Georgia Institute of Technology and a frequent critic of the IPCC, said that Bastardi's statements imply that "he does not understand the very basics of the science." She added, "Fox News needs to find a more credible spokesperson."

In a point-by-point rebuttal to past statements made by Bastardi, NASA climatologist Gavin Schmidt used the words "nonsense," "simply ignorant," "completely wrong," "handwaving," "very odd," and "based on nothing." Schmidt concluded that presenting Bastardi, a weather forecaster, as an expert on climate change is "about as credible as someone claiming to be an expert on the Greenland ice sheet because they eat ice cream."

Earlier this year, Bastardi was back on Fox with more confused claims. He declared on Fox Business that carbon dioxide "literally cannot cause global warming" because it "doesn't mix well with the atmosphere" and "its specific gravity is 1 1/2 times that of the rest of the atmosphere." Asked about Bastardi's statements, Kerry Emanuel of MIT said: "Utter rubbish. Sorry to be so direct, but that is just the case." NASA climatologist Gavin Schmidt added: "Bastardi is attempting to throw out 150 years of physics." "He seems very confused," said physicist Richard Muller.

Last year, Fox Nation, a section of FoxNews.com, claimed that a Boston University study found that "Greenhouse Gas Emissions Reduce Global Warming." But Dr. Robert Kaufmann, the study's lead author, called the headline "patently false." In fact, the study confirmed "the current understanding" of greenhouse gases' effect on the climate, but found that a "rapid growth in short-lived sulfur emissions" largely due to Chinese coal consumption had had a "cooling effect," temporarily counteracting some greenhouse gas warming. But this is hardly good news: sulfur emissions have severe health effects.

Earlier this year, polar bear scientist Dr. Steven Amstrup criticized Fox Nation and other conservative media outlets for distorting a recent study by the government of Nunavut in Canada to claim that the number of polar bears is "increasing." Amstrup told Media Matters that these outlets were mistaking a single point estimate for a trend, adding that "in the bigger picture, whether any one population is currently declining, stable or increasing is beside the point."

In April, a study of satellite data found that nighttime land temperatures in the immediate vicinity of wind turbines in Texas have increased relative to nearby areas without turbines. Fox Nation seized on the research to claim that "Wind Farms Cause Global Warming" and Fox & Friends concluded "wind ain't working." But the study's lead author, University of Albany's Liming Zhou, told Media Matters that Fox's coverage is "misleading." The researchers said in a press release it is "[v]ery likely" that "wind turbines do not create a net warming of the air and instead only re-distribute the air's heat near the surface, which is fundamentally different from the large-scale warming effect caused by increasing atmospheric concentrations of greenhouse gases."

Fox Nation twisted a 2011 study from the National Solar Observatory and the Air Force Research Laboratory to claim that "We Might Be Headed for a Mini Ice Age." But solar physicist Frank Hill, who was involved in the research, told Media Matters that Fox made a "huge leap" from current scientific understanding of the variables involved, clarifying: "We are NOT predicting a mini-ice age."

8. Climate Change Contrarian Said Fox's Mention of Him "Does Not Make Sense."

A FoxNews.com article last year sought to debunk the fact that Earth has warmed over the past 30 years, as well as the notion that human activity has contributed to the warming. The article stated that climate scientist Roy Spencer "takes issue with the way that data is normalized and adjusted." But Spencer, who contends that most of the observed climate change is natural and says he "love[s] FoxNews," called the report "a little sloppy," adding that "the part that mentions me... does not make sense." The same article cited weather forecaster Joe Bastardi to claim that El Niño is responsible for recent warming—a claim that climate scientist Kevin Trenberth called "utter nonsense."

Earlier this year, Fox Nation promoted a misleading report on a climate study with the headline "Study Refutes Manmade Warming." But the study's lead author, Syracuse professor Zunli Lu, said his study "does not question the well-established anthropogenic warming trend" and that by making that suggestion, Fox and other media outlets "completely misrepresent our conclusions," which were focused on only one site in Antarctica.

10. Stanford Scientist: Fox's Coverage Did "Not Accurately Portray Our Findings."

Citing a 2011 study on the impact of climate change on the world's crops, Fox Nation declared that there has been "No Global Warming In North America." But Stanford's David Lobell, one of the authors of the study, explained that the study "was only focusing on one aspect of climate change (impacts on agriculture) and looked only in the parts of the countries where and times of year when certain crops are grown." He added that he was "disappointed" in Fox's coverage, which did "not accurately portray our findings."