10 Reptiles and Amphibians Pushed Toward Extinction in the U.S. 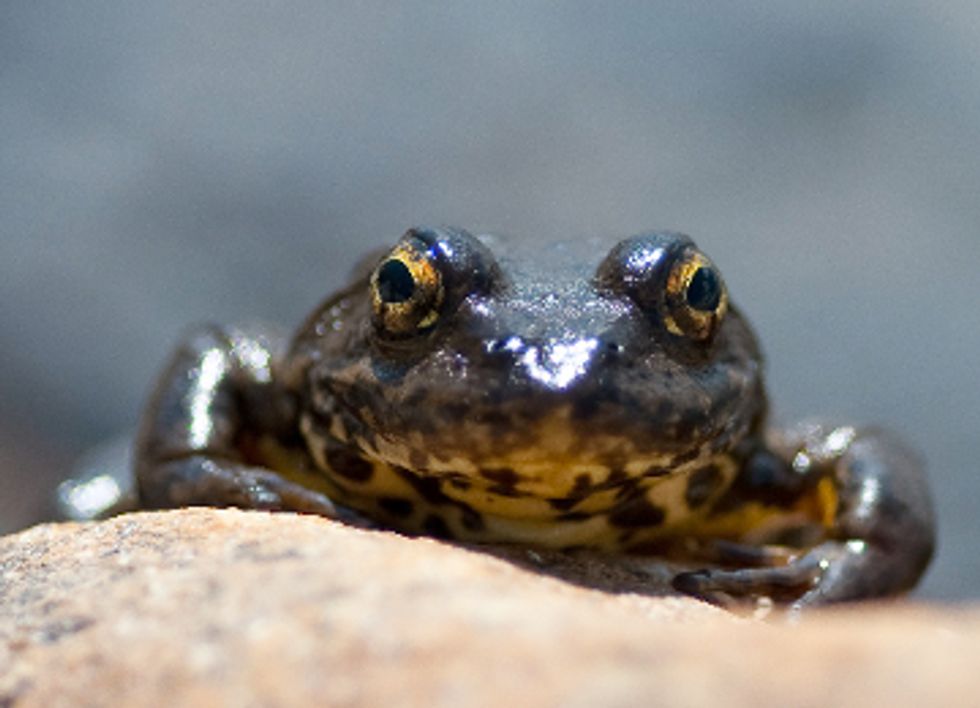 A new report by the Center for Biological Diversity (CBD) identifies the nation’s top 10 amphibians and reptiles in need of immediate federal protection to stave off extinction. The list includes a yellow-legged frog from California’s high Sierras, a two-foot-long eastern salamander and a colorful northeastern turtle.

The report, Dying for Protection: The 10 Most Vulnerable, Least Protected Amphibians and Reptiles in the United States, details the population declines and ongoing threats that have left once-common species like the western pond turtle and boreal toad spiraling toward extinction.

“These increasingly rare frogs, salamanders and turtles are on the fast track toward extinction if we don’t step up and rescue them,” said Collette Adkins Giese, a CBD lawyer and biologist who specializes in conserving amphibians and reptiles. “And it’s not just about protecting these irreplaceable amphibians and reptiles; it’s about protecting the health of the priceless environment we share with them.”

Some of the species included in the report have lost more than 90 percent of their habitat and, without Endangered Species Act protection, many will continue to decline due to fragmentation of their declining populations, pesticide pollution, killer diseases and over-collection. Scientists now estimate that one in four of the nation’s amphibians and reptiles are at risk of extinction, yet they make up only 61 of the approximately 1,400 U.S. species protected under the Endangered Species Act.

Last year the CBD and several internationally renowned conservation scientists, including E.O. Wilson and Thomas Lovejoy, filed a petition seeking Endangered Species Act protection for 53 of the nation’s most threatened species of amphibians and reptiles. In 2011 the CBD signed a landmark settlement with the U.S. Fish and Wildlife Service that is speeding protection decisions for 757 species, including dozens of amphibians and reptiles. The 10 species included in the report are among the neediest of the many reptiles and amphibians still waiting for the lifesaving protection of the Act, which over the past 40 years has prevented the extinction of 99 percent of the plants and animals entrusted to its care.

However, amphibians and reptiles continue to disappear at an alarming rate.

“Frogs, turtles and salamanders are some of nature’s most delightful and fascinating creatures,” said Adkins Giese. “They also help control populations of insects and rodents and in some cases even provide cures for diseases. We can and should help them avoid an extinction crisis.”

Although they once greeted visitors by the hundreds at some high mountain lakes, populations of these three-inch frogs have now declined by about 90 percent due to introduced fish, toxic pesticides, killer diseases and habitat loss. In accordance with the CBD’s 2011 landmark settlement, two species of mountain yellow-legged frogs were proposed for federal protection in April, along with more than a million acres of critical habitat essential for their protection and recovery. The increasingly rare California amphibians still face an uphill battle for protection as anti-conservation groups and politicians are fighting the proposal.

These two-foot-long, fully aquatic amphibians are threatened with extinction due to dams and water pollution, including mountaintop-removal coal mining that contaminates their once-pristine stream habitats. With flattened bodies, paddle-like tails for swimming and numerous folds of skin for oxygen absorption, these amphibians known as “devil dogs,” “mud devils,” “walking catfish” and “snot otters” are uniquely adapted to aquatic life. Once they were found across most of the eastern U.S., but it is now unknown in how many states North America’s largest amphibian still survives. The hellbenders have been under consideration for Endangered Species Act protection since the CBD petitioned for them in 2010.

This tiny, colorful lizard, once common along the sandy shoreline of the Dry Tortugas and Lower Keys, has declined by up to 30 percent and continues to be threatened by development and sea-level rise. Because it burrows in loose shore soils and uses stones and driftwood for cover, the mole skink could be pushed to extinction by sea levels projected to rise up to six feet within this century. In 2010 the U.S. Fish and Wildlife Service found that Endangered Species Act protections for the lizard may be warranted but the agency failed to make a final decision within one year, as the Act requires. The CBD is prioritizing the skink for a protection decision through its work with the Fish and Wildlife Service.

This small, brown lizard that buries itself in sand to regulate its body temperature and avoid predators is considered one the nation’s most imperiled lizards. Under continuous threat from ongoing oil and gas drilling and herbicide spraying for livestock grazing, it clings to survival on a very small and increasingly fragmented range in southeastern New Mexico and west Texas. After spending nearly 30 years as a candidate for Endangered Species Act listing, the lizard was proposed for federal protection in 2010, only to see the Fish & Wildlife Service reverse course 18 months later and withdraw the proposal in favor of voluntary, but unenforceable, conservation agreements with private landowners that are now being challenged in court by the CBD and its ally as illegal.

Once widespread across the Southeast, these foot-long tortoises have been reduced to small, isolated populations by pine plantations and suburban sprawl that have destroyed the majority of their longleaf pine habitat. Grazers who can live more than 50 years, gopher tortoises are critical to healthy ecosystems because they build elaborate burrows that provide habitat for more than 360 other species including rabbits, quail, owls, frogs and snakes. The tortoises are also threatened by rattlesnake hunters, who purposefully destroy tortoise burrows while collecting snakes for cruel “rattlesnake roundups.” In 2011 the U.S. Fish and Wildlife Service found that the tortoises warranted protection under the Endangered Species Act but placed the species on a list of candidate species awaiting federal protection.

Once common in the western U.S., boreal toads have seen their populations plummet in recent decades due to the spread of a deadly fungus and the destruction of high-elevation stream and wetland habitat by pollution and poorly managed recreation and livestock grazing. Prior to a recent reintroduction effort these three- to four-inch toads were nearly extirpated in southern Wyoming and likely extirpated in New Mexico. They now exist in less than one percent of their historic breeding areas in the southern Rockies. In response to a CBD petition, in 2012 the U.S. Fish and Wildlife Service found that Endangered Species Act protection may be warranted and initiated a full status review of the toads in the southern Rocky Mountains, Utah, southern Idaho and northeastern Nevada.

This medium-to-large turtle targeted by the pet trade because of its beautiful yellow chin and throat once ranged through much of the Great Lakes region and the northeastern U.S. But after extensive declines from collection, habitat loss, road mortality and intense predation on eggs and hatchlings the only large remaining populations are found in Minnesota and Nebraska. They’re also threatened by “turtle derbies,” in which wild turtles are exposed to infectious diseases after being caught and brought into close proximity during races that are still part of some small-town summer celebrations. Since 2012 the turtle has been under consideration for Endangered Species Act protection.

These four- to 10-inch long “pond” turtles that live in streams and rivers and spend lots of time on land were once common from western Washington south to northwestern Baja California. But due to habitat destruction, disease, runoff contamination and pesticides the turtle essentially has been extirpated from its historic habitat in the lower Puget Sound, and only two populations remain in the Columbia River Gorge. In Oregon’s Willamette Valley the turtles are estimated to have declined to roughly one percent of historic levels and in California most remaining populations are small and declining with low viability. The western pond turtle is one of six turtles included in the CBD’s 2012 listing petition.

These four- to five-foot-long powerful constrictors with notoriously low birth rates were once common in parts of Louisiana and Texas. But with the ongoing loss of its the longleaf pine ecosystem it is likely already extinct in Texas, and fewer than 100 likely remain in Louisiana. Unless the snake receives urgently needed protections, scientists predict it will likely go extinct in the wild within a decade. Fortunately the snake is scheduled to receive Endangered Species Act protection by 2014 under the CBD’s settlement with the Service that is leading to listing decisions for hundreds of candidate species awaiting federal protection.

Known only to a 12-mile stretch of Virginia’s Blue Ridge Mountains, these darkly pigmented, five-inch-long salamanders have one of the most restricted ranges of any salamander in the U.S. Because these lungless amphibians never move more than a few feet from underground retreats located in the mature oak and maple forests of a single ridge top they cannot shift their range upslope as the climate warms, making them particularly vulnerable to climate change. The salamander is one of 24 salamanders included in the CBD’s 2012 listing petition, but ongoing logging and habitat destruction continue to place it at great risk of extinction