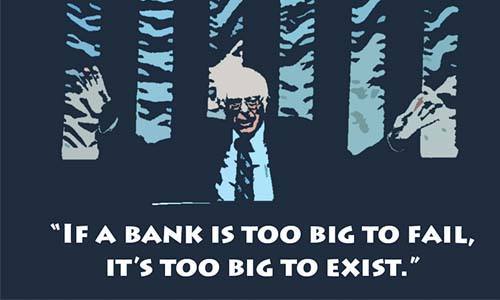 Bernie Sanders has declared war on the biggest players in Wall Street’s financial sector. He says they are overrun with “greed, fraud, dishonesty and arrogance” and criticizes his top rival for the Democratic nomination, Hillary Clinton, as being naïve about what needs to happen to create a financial system that “works for all Americans.”

On Tuesday, he upped the ante. “To those on Wall Street who may be listening today, let me be very clear,” Sanders said in a midtown Manhattan speech. “Greed is not good. In fact, the greed of Wall Street and corporate America is destroying the fabric of our nation. And here is a New Year’s resolution that I will keep if elected president: If you do not end your greed, we will end it for you.”

WATCH: @BernieSanders: "If Wall Street does not end its greed, we will end it for them." https://t.co/BkyAaZgKzX

Sanders laid out a 10-point program to deeply change the nature of the financial sector, while occasionally digressing to emphasize how much more sweeping his proposals are compared to Clinton’s. As always, he started by recounting how the “20 richest people own more wealth than the bottom 150 million Americans”—and said the finance industry has spent “billions” to get Congress and federal agencies to deregulate almost all areas of the financial industry while weakening consumer protection laws.

“They spent this money in order to get the government off their backs and to show the American people what they could do with that new-won freedom,” he said. “They sure showed the American people. In 2008, the greed, recklessness and illegal behavior on Wall Street nearly destroyed the U.S. and global economy. Millions of Americans lost their jobs, their homes and their life savings.” Sanders continued, “While Wall Street received the largest taxpayer bailout in the history of the world with no strings attached, the American middle class continues to disappear, poverty is increasing and the gap between the very rich and everyone else is growing wider and wider.”

Here are the 10 major components to Sanders’ Wall Street reforms.

The underlying logic of this federal policy is that the biggest banks cannot fail and shut down, even if they make terrible investments or wreak great harm to the economy, because the U.S. economy and millions of ordinary people would become financially destitute. Sanders said this “scheme … is nothing more than a free insurance policy for Wall Street.” Compared to before the crash of 2008, the biggest banks in the country are larger than ever, he said, adding, “if a bank is too big to fail, it is too big to exist.”

“In 2008, the taxpayers of this country bailed out Wall Street because we were told they were ‘too big to fail,’” Sanders said. “Yet, today, three out of the four largest financial institutions [JP Morgan Chase, Bank of America and Wells Fargo] are nearly 80 percent bigger than before we bailed them out. Incredibly, the six largest banks in this country issue more than two-thirds of all credit cards and more than 35 percent of all mortgages. They control more than 95 percent of all financial derivatives and hold more than 40 percent of all bank deposits. Their assets are equivalent to nearly 60 percent of our GDP. Enough is enough!”

Sanders concluded, “A handful of huge financial institutions simply have too much economic and political power over this country. If Teddy Roosevelt, the Republican trust-buster, were alive today, he would say, break ‘em up. And he would be right.”

2. Break Up the Biggest Banks

If elected, Sanders said he would direct the Treasury Department to compile a list of the institutions “whose failure would pose a catastrophic risk to the U.S. economy without a taxpayer bailout.” Using the power of executive authority, he would break up these institutions. “Within one year, my administration will break these institutions up so that they no longer pose a grave threat to the economy as authorized under Section 121 of the Dodd-Frank Act.”

"Not only are large banks too big to fail, but the bankers are too big to jail. That's gotta change." @BernieSanders pic.twitter.com/iwzcgOoTEs

This Depression-era law, which was repealed by Congress under President Bill Clinton, prevented commercial banks from investing in risky and arcane financial instruments, such as bundled home loans during the housing market bubble that predated the 2008 financial market collapse.

“Secretary Clinton says that Glass-Steagall would not have prevented the financial crisis because shadow banks like AIG and Lehman Brothers, not big commercial banks, were the real culprits,” Sanders said. “Secretary Clinton is wrong. Shadow banks did gamble recklessly, but where did that money come from? It came from the federally insured bank deposits of big commercial banks—something that would have been banned under the Glass-Steagall Act.”

Moreover, Sanders said his work as a senator revealed that the Federal Reserve and the Treasury Department “provided more than $16 trillion in short-term, low-interest loans to every major financial institution in the country” to stop the global economy from imploding after the 2008 crash. “Secretary Clinton says we just need to impose a few more fees and regulations on the financial industry. I disagree.”

Sanders said that the government needs to run Wall Street, not the other way around, which he said is the reality today. He said that “equal justice under the law” means that banking and finance executives whose reckless gambles damaged people’s lives must face real criminal penalties including prison.

“The average American sees kids being arrested and sometimes even jailed for possessing marijuana or other minor crimes,” Sanders said. “But when it comes to Wall Street executives, some of the wealthiest and most powerful people in this country, whose illegal behavior caused pain and suffering for millions—somehow, nothing happens to them. No police record. No jail time. No justice.”

He noted that “not one major Wall Street executive has been prosecuted for causing the near collapse of our entire economy” and that “will change under my administration.”