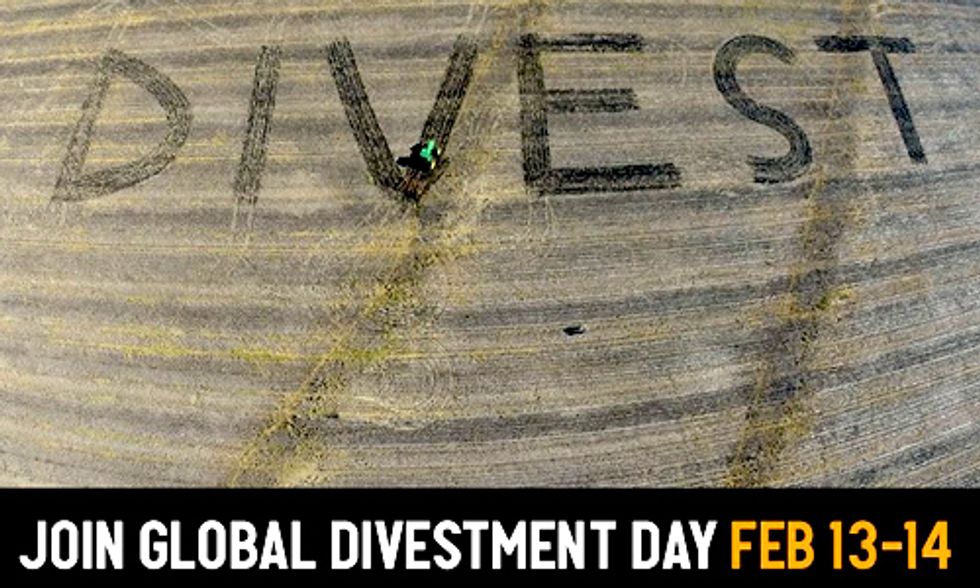 This is going to be a global party—right now there are around 300 events happening on six continents for Global Divestment Day on Feb. 13 and Feb. 14. From South Africa to Mexico, Bangladesh to Benin, and Bulgaria, people are showing commitment to taking on the fossil fuel industry.

If you would have Googled fossil fuels, carbon bubble and divestment a few years ago you probably wouldn’t have gotten that much. Oh, how things have changed. Now, media outlets like The Guardian are calling it “The fastest growing divestment campaign ever.” If you want to be a part of history. Now is the time.

2. A key window of opportunity

"What’s really been striking to me is understanding that it really kind of makes sense why, despite all of the consciousness-raising that has taken place over the past decade–why this hasn’t translated into action. It’s because we have been working against the titanic power of enormous profit … So, I think we’re in a much better situation to win that. But we need to understand that this is a window. This is the last moment to be complacent.”

Listen up. The Pacific Climate Warriors have something to say:

4. Even some of the world’s biggest banks are realizing it’s time

This wasn’t written by Naomi Klein or Bill McKibben—this was written in a report by Deutsche Bank:

“If the world takes its climate change commitments seriously, then the dynamics of oil will be altered beyond recognition. Oil will become constrained by the level of demand allowed under CO2 emission limits and this will have implications for the behaviour of countries, companies and consumers alike. Perhaps last year’s fall was the first rumbling of this upcoming profound change.”

Banks know it, you know it, we know it—fossil fuels are history.

5. Even The Economist is telling us to ‘Seize the Day’ and move past fossil fuels

People everywhere are getting ready for Global Divestment Day—including Queensland farmer Rob McCreath who made this incredible divestment crop circle on his property over the weekend.

8. Always looking for an excuse to ride bikes in Amsterdam

Global Divestment Day is going to be fun!

9. Always looking for an excuse to dance in South Africa

Global Divestment Day is going to be fun. This 7 piece band from Soweto will be making sure that the South Africa events are going to make people move.

10. We have the solutions

Solar, wind and other renewable energy projects—it just makes sense. All over the world communities are reinvesting in solution that work and seeing the rewards.