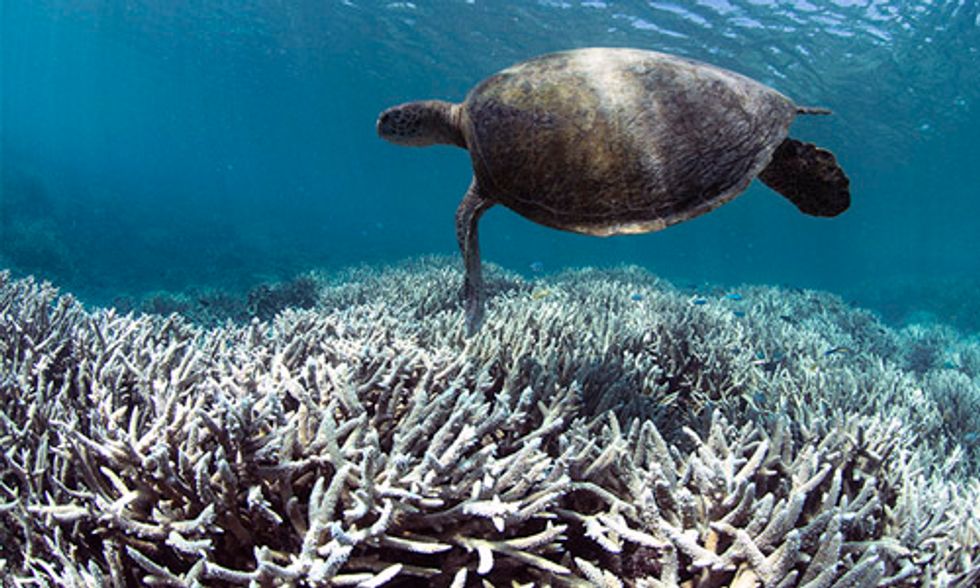 Some of Thailand's most prized dive sites have been closed indefinitely after the Department of National Parks' survey found coral bleaching on 80 percent of some of the reefs.

This is a bold move for a country where tourism accounts for 10 percent of its economy—and where officials were hoping to attract 32 million tourists this year, The Guardian reported. But then again, it sends the message Thailand officials want: Ignorant tourism is killing the reefs.

A turtle swimming over bleached coral in February at Heron Island in the Great Barrier Reef. Photo credit: The University of Queensland

“The coral reefs are affected by unaware tourists–when they go diving they may touch or step on the reef. Closing those spots will help the reefs recover naturally," Reungsak Theekasuk, national park officer director, told AFP.

The closed diving sites are off beaches from Rayong province in the east to Satun in the south. These closings come after Thai officials closed Koh Tachai, a popular island in the Andaman Sea, earlier this month. The island is closed indefinitely.

"This is such a small island, I would say it could accommodate just a few hundred tourists a day," Tunya Nethithammakul, director general of the Department of National Parks, told CNN. "But it turned out that at certain points there were almost 2,000 tourists visiting the island (daily)."

The closings are shunned by the tourism industry, but officials say it is a necessary step in protecting the country's ecosystem.

“The problem is that we have damaged our marine resources for a long time," Thon Thamrongnawasawat, deputy dean of fisheries at Kasetsart University in Bangkok and a leading advocate of marine conservation, told the New York Times. “If we want it to recover, we must use strong medicine. I am not proposing to close all islands. But we have to start thinking about the plan to tackle the increasing number of tourists."

Photo credit: The University of Queensland

While the popular diving sites and island are closed, officials will inspect them to determine if tourists will be allowed back by peak tourism season, which begins in November.

“Where we see there is still a crisis, we will have to keep the area and reefs preserved," Reungsak told The Guardian.

Coral bleaching is primarily caused by warming waters. When corals come under environmental stress, they shed the algae that gives them their color. The coral then become white, or bleached. If the stress continues, the coral will eventually die, according to the National Oceanic and Atmospheric Administration (NOAA).

This phenomenon has been a major problem for the world's reefs for the last decade. The U.S. lost half of its coral reefs in the Caribbean in 2005 due to a bleaching event, according to NOAA. Earlier this year, the Great Barrier Reef suffered its worst coral bleaching event in history.

It is possible, though, for reefs to bounce back after bleaching events with the proper management.

Even if you don't live right by the ocean, your decisions can affect coral reefs as well, find out what you can do to help prevent coral bleaching.

Massive Coral Reef Discovered at Mouth of Amazon, But It's Already Threatened by Oil Drilling