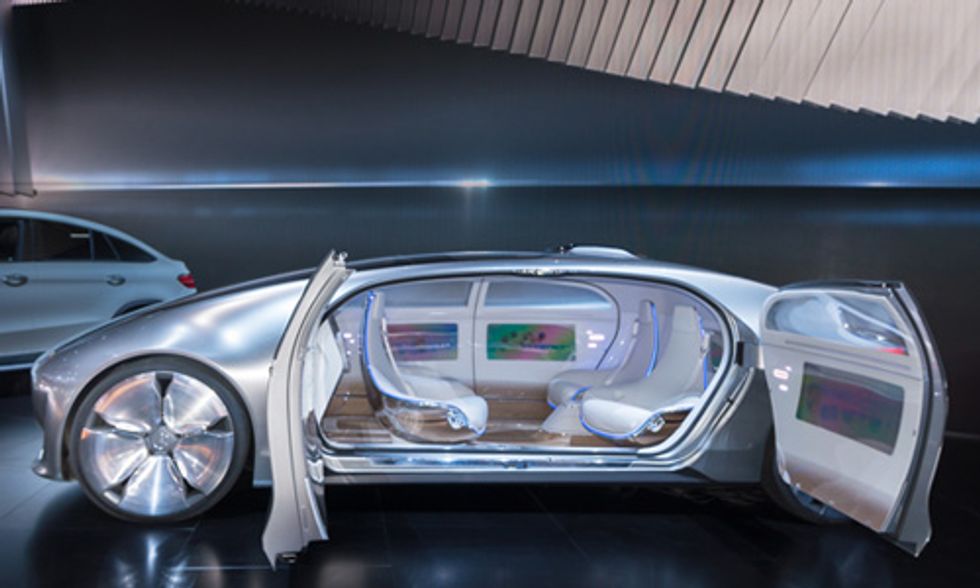 Gas prices may be plunging right now, but that hasn't stopped the carmakers at the 2015 North American International Auto Show from competing to show off their new hybrid and all-electric cars. The auto show expects more than one million people to come to Detroit, Michigan to see the 45 new vehicles on display from Jan. 12-25.

The Mercedes-Benz F015 Luxury in Motion is a concept car that is both electric and autonomous.
Steve Lagreca / Shutterstock.com

And many of those new vehicles are hybrid and electric. Elon Musk, the founder of Tesla Motors, doesn't feel threatened by the competition, according to CBS, because the trend is toward electric. Musk said, "the price of gasoline at any one time is irrelevant." Electric vehicles are the future.

Levi Tillemann, author of The Great Race: The Global Quest for the Car of the Future, said yesterday on Marketplace, "It's almost inevitable that the car of the future is going to be electric, and it's going to drive itself." As more and more states follow California's lead in mandating that a certain percentage of their vehicles are electric, electric vehicles will really take off. And "One of the benefits of electric vehicles is that electricity can be made out of any energy source," so, as we transition more and more to renewables, electric vehicles will come from cleaner energy sources.

Here's a list of 10 top electric cars from the Detroit Auto Show:

Volkswagen's new electric car goes up to 83 miles for less than $3 with zero-tailpipe emissions. And it's making waves in the auto industry: it won the 2015 Motor Trend Car of the Year.

The FCV is a fuel cell electric vehicle. This zero-emission hydrogen powered car has a 300+ mile range and can recharge in under five minutes. It's expected to launch in the U.S. following a projected March 2016 introduction in Japan.

The Tesla S has had some production delays and runs just over $70,000, but Musk is confident the price will go down once it's mass-produced. Tesla has only sold 30,000 Model S cars this year, but Musk hopes to sell 500,000 annually of this all-electric sedan by 2020. Tesla announced in September that it's planning to build a giant “gigafactory” outside of Reno, Nevada to manufacture the batteries that power the cars. Tesla is planning to release the Model III in 2017, which will offer a more affordable $35,000 price tag.

With a convertible option, this tiny car has an impressive government MPGe rating (miles per gallon gasoline equivalent) of 122 miles in the city and 93 on the highway.

The car was first introduced as a plug-in hybrid sports car. Now the 2015 model is electric with a range of 15-23 miles and a MPGe rating of 76. Deliveries to U.S. customers began in August 2014.

General Motors wants to build on the success of its Chevy Volt hybrid with this new all-electric car. The carmker estimates it will go 200 miles on a single charge and cost $30,000. The Bolt is still a concept car, but it's debuting a 2016 update to the Volt hybrid.

Chinese auto maker GAC Group's Witstar is a concept car that will be autonomous (able to drive itself) and electric. The makers say it will have a Chevy-Volt like setup with a total electric range of 62 miles or more.

The 2015 Audi A3 E-tron plug-in hybrid can travel up to 31 miles on electricity alone or cover 550 miles with gas.

This carmaker known for its luxury sports cars is going electric. It's prototpye, dubbed Luxury in Motion, is electric and autonomous. Since the car drives itself, it has a "variable seating system with four rotating lounge chairs that allow a face-to-face seat configuration." Mercedes is also showcasing its C350 plug-in hybrid, which is expected to go on sale in March this year.

The Swedish automaker offers an SUV hybrid with a MPGe of 59. Volvo says it will go up to 25 miles on electric and can charge in two and a half to six hours.

How Much Money Can You Save By Switching to an Electric Car?