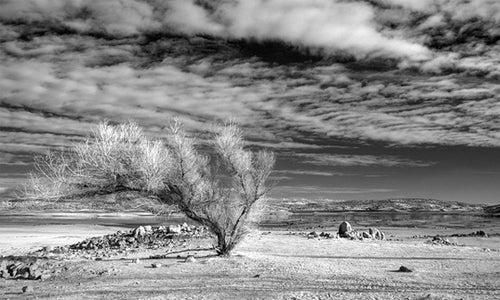 The calendar is about to flip over once again, meaning it’s time for the obligatory roundup of the most important environmental stories of the past year.

This list is mostly subjective—my own personal picks, filtered through my own lens. But I did reach out to a several dozen environmental activists and thinkers to tap into the wisdom of the crowd. I asked folks to give me their suggestions not necessarily for the “biggest” news as measured by headlines or page views or likes, but for the most important stories. That is, happenings likely to have an impact on ecosystems, politics, economy and culture beyond 2014.

Not surprisingly, climate change and energy once again dominate the list. But there was also some important news in wildlife conservation and loss, forest protection and politics. Without further ado, here’s my list of the top 10 most important environmentally related stories of 2014. 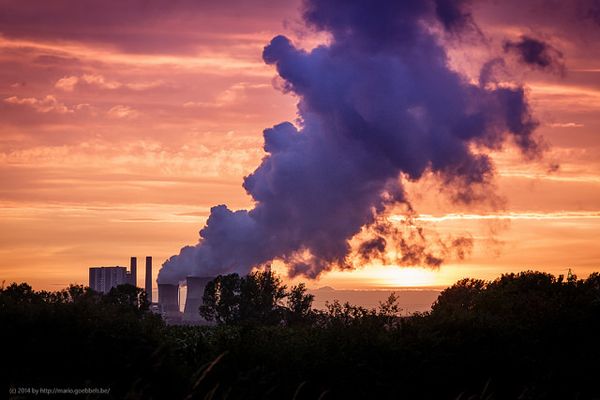 President Obama has been a reluctant warrior when it comes to the environment. In his first term he focused on dealing with the biggest financial meltdown and recession in a generation, and then passing his signature health care reform. Now, hamstrung by an oppositional Congress, he’s found that one of the issues on which he can use his executive authority to make real progress is climate change.

In June, Obama’s EPA announced draft rules to slash carbon pollution from power plants, the largest source of U.S. greenhouse gas emissions. Once finalized in 2015, the rules are expected to slash power plant emissions by 25 percent by 2020 and 30 percent by 2030 (from a 2005 baseline). Fossil fuel interests are attempting to challenge the rules in court, but the administration’s actions rest on solid legal footing. In a landmark case in 2007, the Supreme Court ruled 5-4 that “greenhouse gases fit within the [Clean Air Act’s] capacious definition of an air pollutant.” Here’s how Sierra Club executive director Michael Brune described to me the importance of the rules for a story I wrote for The Daily Beast:

“This is the kind of leadership that we’ve needed for a long time. And the impacts on clear energy will be huge. For the first time we are regulating carbon [dioxide] from arguably the largest source of carbon [dioxide] in the U.S. Unlike every single other pollutant, there has never been any limit on the amount of carbon pollution that can be dumped into the atmosphere. And [now] that will change. And that change is profound—it’s historic.”

“But what about China?” That line—usually delivered in the equivalent of a falsetto whine—has long been the fossil fuel industry’s centerpiece complaint about any U.S. actions on reducing greenhouse gas emissions. In short: U.S. actions don’t matter as long as other major polluters resist making emissions reductions. Here’s a classic bit of concern trolling from the U.S. Chamber of Commerce a week after the power plant rules were announced: “The problem is that the climate is a global issue, not just a U.S. one. … To date, China, India and other major emitters have shown no interest in reducing their emissions appreciably.” Well, the chamber lost that talking point (and President Obama chalked up a major diplomatic accomplishment) when, in November, the U.S. and China announced a bi-lateral agreement to tackle climate change. The U.S. promised to cut emissions by up to 28 percent by 2025—a significant boost from Obama’s earlier goals to cut emissions 17 percent by 2020. (Again, these numbers are from a 2005 baseline). For their part, the Chinese pledged that their emissions would peak sometime around 2030, and also that they would generate at least 20 percent of their power from renewable sources by that year.

To be sure, there’s a lot of wiggle room in the non-binding pledge, which merely outlines what the two nations “intend” to do. Still, climate hawks agree that this is a Very Big Deal. Together, China and the U.S. account for about 45 percent of total greenhouse gas emission, so what these giant emitters intend matters. Their joint pledge—however squishy—keeps hope alive that climate negotiators meeting in Paris in December 2015 will be able to craft a global agreement to ratchet down emissions. 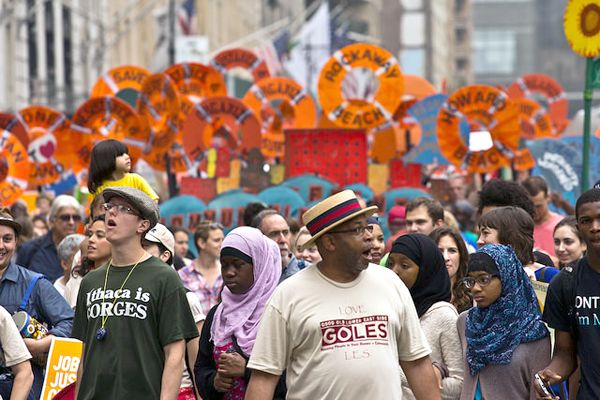 While the sheer size of the People’s Climate March in New York was clearly important, the diversity of the participants was even more so. Photo credit: maisa_nyc’Flickr

The turnout blew away organizers’ expectations. The constellation of environmental and social justice groups behind the Sept. 21 People’s Climate March in New York City were hoping to enlist at least 100,000 people to participate in their mass mobilization. At least three times as many people turned out for what observers agreed was the largest climate demonstration in history. Let me just say that again: the largest climate demonstration in history.

While the sheer size of the march was clearly important, the diversity of the participants was even more so. There’s a persistent and pernicious assumption among political observers that only white, affluent, college-educated people care about the environment and climate change. The New York demonstration (along with other marches in cities and towns worldwide) revealed what a lie that bit of snark is. Trade unions played a major role in organizing the march, and young people of color from environmental justice organizations led the massive column. In its ethnic, religious, and age diversity, the march looked like New York City. Global leaders couldn’t help but notice. In a speech just a few days later at the United Nations General Assembly, President Obama alluded to the demonstration when he said: “Our citizens keep marching. We cannot pretend we do not hear them. We have to answer the call.”