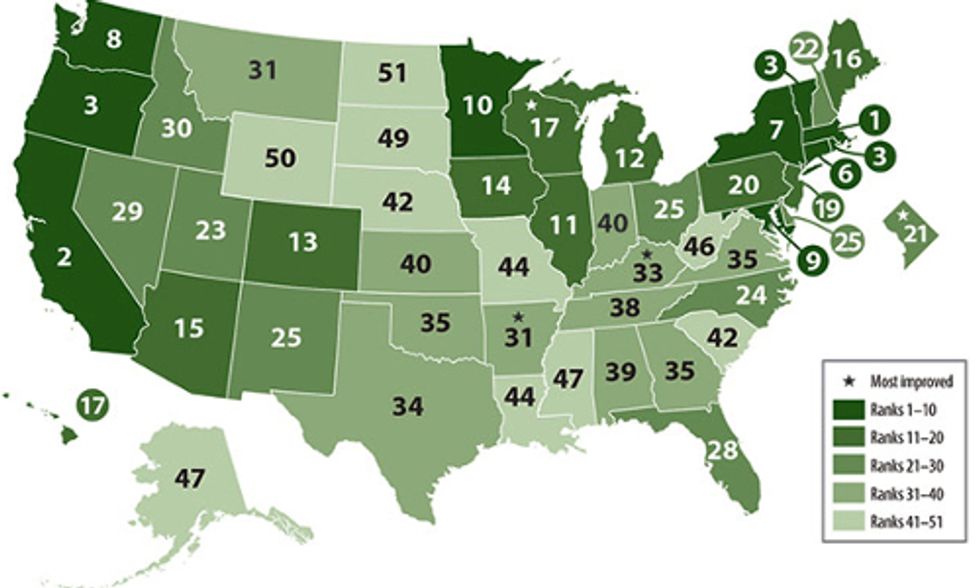 How does your state stack up when it comes to energy efficiency? The nonprofit American Council for an Energy-Efficient Economy (ACEEE) has just issued its eighth annual State Energy Efficiency Scoreboard, which assesses states based on policies that encourage energy savings, efficiency investments and jobs in the clean energy sector. So you can look it up.

Does your state encourage better energy use? Find out what it's doing to promote energy effiiciency. Image credit: American Council for an Energy-Efficient economy

"Conversations about energy use in the United States often revolve around the need to support the growth of our national economy by expanding the energy supply," said ACEEE. "In fact, however, we have a resource that is cleaner, cheaper and quicker to deploy than building new supply—energy efficiency. Energy efficiency improvements help businesses, governments and consumers meet their needs by using less energy. Efficiency saves money, drives investment across all sectors of the economy, creates jobs and reduces the environmental impacts of the energy production system."

The winner for the third straight year is Massachusetts. As in 2013, it scored 42 points out of a possible 50. And it earned a perfect score for its utility policies and programs. It even includes policies that encourage a reduction in vehicle miles.

"Utilities have high levels of  investments in both electricity and natural gas programs, and in 2013 the state achieved electricity savings of more than two percent of sales," said the report. "Massachusetts has one of the most aggressive energy efficiency resource standards in the country."

The state also scored high on transportation, building energy codes, combined heat and power, state-government-led initiatives and looking ahead, six of the seven categories the scoreboard takes into account. The only one it didn't do well on was appliance standards, where it found the state did nothing beyond the required federal standards.

"Massachusetts continues to lead the nation in energy efficiency," says ACEEE. "The state’s Green Communities Act, passed in 2008, set a long-term framework for energy efficiency as a first-priority resource. With other states close on its heels and committed to improving energy efficiency, Massachusetts will need to continue achieving high levels of savings in the utility sector, commit to continually updating building codes and work to better benchmark energy use in the private sector."

California still ranked number two, although its score of 40.5 was a slight o.5 point  drop from last year. It earned at perfect score for its building energy codes and outperformed all other states for its transportation policies. ACEEE noted, "California continues to innovate and is an example for states cross the country."

With one exception, the top ten states are all on the east or west coast. Coming in behind Massachusetts and California, were, in order, Oregon, Rhode Island, Vermont, Connecticut, New York, Washington, Maryland and Minnesota. The most improved states were Arkansas, Washington D.C., Kentucky and Wisconsin.

North Dakota was dead last for the second year at 51. Also lagging in energy efficiency are Indiana and Kansas (tied at 40), South Carolina and Nebraska (tied at 42), Louisiana and Missouri (tied at 44), West Virginia (46), Alaska and Mississippi (tied at 47), South Dakota (49) and Wyoming (50).

With a score of only four points, North Dakota earned a zero for its utility policies and programs, while picking up a handful of points in the other categories.

"This is the second year North Dakota has ranked at the bottom of the State Scorecard, and regulators and policy makers have not indicated that they are interested in pursuing comprehensive energy efficiency policies," said ACEEE. "However, the state may find that there are significant benefits for its residents should it choose to do so."

The study also rated cities, finding Boston to be the leader in its efforts to encourage better energy use. Portland, New York, San Francisco, Seattle, Austin, Washington, Minneapolis, Chicago and Philadelphia round out the top ten.