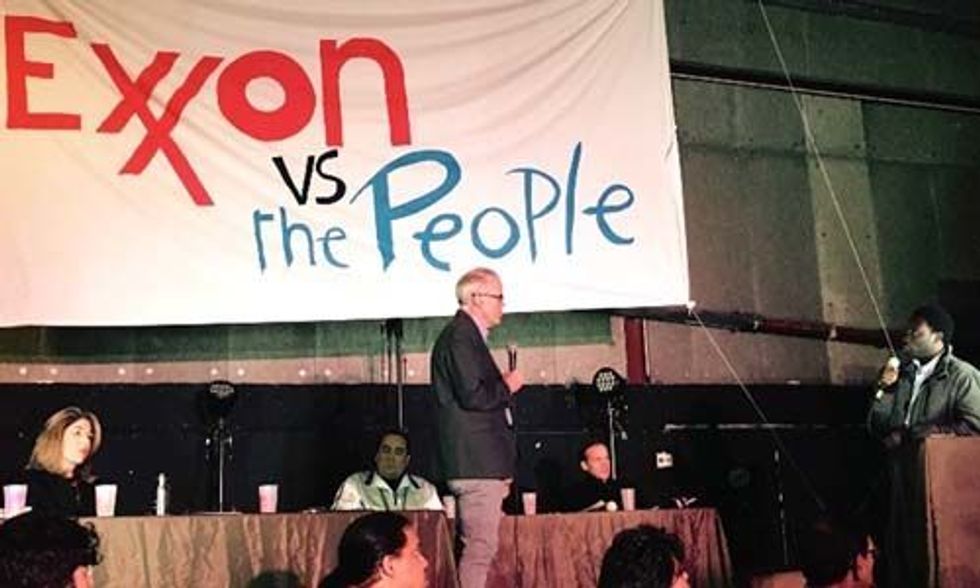 We've really been on a roll this year.

And when I say we I don't just mean 350.org the organization. I mean this big, broad movement we've built together—you, me, 350’s many partner organizations, the hundreds of local groups we work with every day and all the many individuals around the world who take action in ways large and small.

This was such a landmark year that we had a really hard time picking just 10 things for the list below. In fact, it really seems like we're getting close to a sort of climate-action tipping point.

Of course, we're not kidding ourselves into thinking that the fossil fuel industry is going to sit back and let it all happen. (In fact, the Secretary-General of Europe's coal lobby recently accused the European Commission of being “in cahoots with protest movements” and called for the creation of a "less ambitious" climate plan in 2016).

People and companies that benefit from the status quo will pull us backwards if we let them—so we can't let them. Can you help us continue this fight in 2016?

Next year, we're taking on the fossil fuel industry more directly than ever, as well as keeping the pressure on world governments to "close the gap" between the commitments they made in Paris and what the science actually says the world needs. I think next year is going to be at least as amazing as this one.

For now, because everyone loves a good list, here are the top 10 amazing things we did together in 2015 (in no particular order):

1. We Showed That We Are Greater Than Tar Sands

Throughout North America, the fight to stop the Canadian tar sands reached a fever pitch this year. Led by First Nations and other Indigenous groups and backed up by farmers, ranchers, labor unions and organizers in every corner of the continent, this movement stalled pipelines, called out hypocrisy and took to the streets for events like Toronto’s "March for Jobs, Justice and the Climate" and a “Climate Welcome” for new Canadian PM Justin Trudeau.

2. We Made Fracking a Contentious Political Issue in Brazil

The campaign to ban fracking in Brazil heated up big time—to the point that organizers started to feel some serious pressure from industry and the government. From interrupting a fracking auction with Indigenous voices to sparking protests at Brazilian embassies around the world, our team in Brazil is causing a stir.

3. We Shut Down One of the Biggest Coal Mines in Europe

To be fair, it was just for a day ... but nobody’s stopping there. The "Ende Gelände" action—translated as "here and no further"—was organized by grassroots climate activists to shut down the Garzweiler lignite mine in Germany. Most of the 1,500 people who participated in this epic act of civil disobedience had never done anything like it before.

4. We Pulled the Rug Out from Under Australia’s Biggest Coal Project

Our friends at 350 Australia—along with a big coalition of partners—helped pressure more than 14 banks to pull funding from Adani’s proposed giant coal mine in the Galilee Basin.

Divestment activists in California worked hard to pass a precedent-setting bill to divest the state’s two huge pension funds from coal, which together total half a trillion dollars. Up next: working even harder to divest from all fossil fuels.

6. We Called Out One the Richest, Most Powerful Corporations on the Planet

They really deserved it. After the revelations earlier this year that Exxon knew about the impacts of climate change nearly 40 years ago, we shone a spotlight on their criminal campaign of deception and denial. Along with many of our partners and allies, we’ve asked U.S. Attorney General Loretta Lynch to investigate Exxon for their cover-up. And we’re going to keep pressing.

7. We Mobilized Against "Free Trade" Agreements that Consolidate Corporate Power

From the U.S. to the Philippines, we stood strong against "free trade" agreements like the Trans Pacific Partnership and the Asia-Pacific Economic Cooperation forum. Agreements like these are often negotiated in secret and put corporate interests over people's well-being.

8. We Raised the Bar on Divestment Commitments—to $3.4 Trillion (and Counting!)

2015 was a great year for the fossil fuel divestment movement. Global Divestment Day in February saw hundreds of events around the world, students escalated their campaigns on campus throughout the early part of the year and a snowballing of divestment commitments ahead of the Paris climate summit brought the new count to $3.4 trillion in managed assets committed to divestment.

9. We Stopped the Keystone XL Pipeline

President Obama may have struck the final blow, but it was the climate movement that stopped the world’s most notorious pipeline. When we started fighting this thing, they said it was a done deal. It was a long, hard fight, but it was worth it. Let that be a lesson to all the pipeline builders, coal financiers and frackers of the world: Don’t bet against the climate movement. We’re playing for keeps.

The Paris climate agreement doesn’t get us where the world needs to be. But we have a deal and that’s extraordinary. Although our plans had to change following the terrorist attacks in Paris in November, the climate movement really came together before and during the big summit—for the Global Climate March on Nov. 29, which brought 775,000 people into the streets in more than 2,300 places around the world and for the final mobilization in Paris at the end of the talks. Now it’s up to us to close the gap between the rhetoric of the deal and the reality of this crisis. And we’re ready.

10 Most Watched Eco Videos of the Year