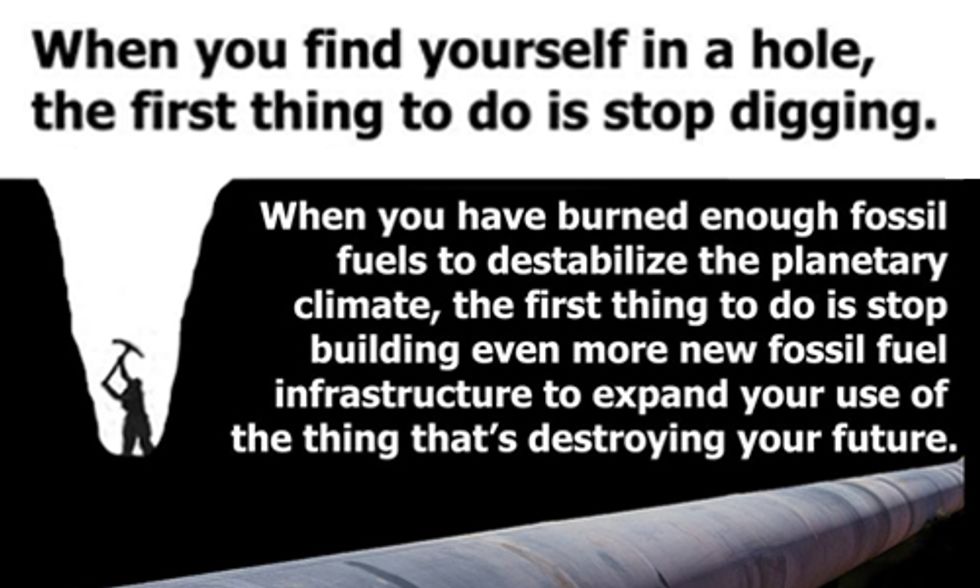 Since April 2014, 10 fracking infrastructure projects have been canceled or delayed.

April 2014: The Bluegrass Pipeline in Kentucky was stopped by a court decision upholding landowners’ rights against the use of eminent domain to take their land for private profit.

March 2016: The Republican-dominated Georgia legislature voted overwhelming for a one-year moratorium on any new gas pipelines, setting back efforts to build the Palmetto Pipeline.

April 2016: The Oregon LNG company announced that it's ending its years-long effort to build an export terminal and pipeline.

April 2016:  Kinder Morgan announced it is suspending its efforts to build the Northeast Energy Direct pipeline, which would have run from Pennsylvania through New York into Massachusetts and New Hampshire.

April 2016: Dominion Resources announces that the start time for beginning construction on the Atlantic Coast pipeline, going from West Virginia through Virginia into North Carolina, is being moved back from this fall to summer 2017.

April 2016: New York Governor Andrew Cuomo announced that the New York Department of Environmental Conservation rejected the application of the Constitution Pipeline company for a water quality permit, a permit it must have in order to begin construction.

“We are actually experiencing the clean energy revolution, it’s really happening right now,” I said to my wife when I heard the news about the Constitution Pipeline.

It's very significant that the movement against fracking and fracking infrastructure projects is winning these victories, but it does not mean we can take a break. As of March 24, FERC's lists 58 interstate gas pipelines on their website.

We need to gain strength from these victories and, with the wind shifting from a headwind to being more at our back, step up our pressure on FERC, and the gas and pipeline industry. Join Beyond Extreme Energy from May 15 to May 22 in Washington, DC for the Rubber Stamp Rebellion.

Ted Glick is a co-founder of Beyond Extreme Energy and a climate activist since 2003. Past writings and other information can be found here, and you can follow him on Twitter.