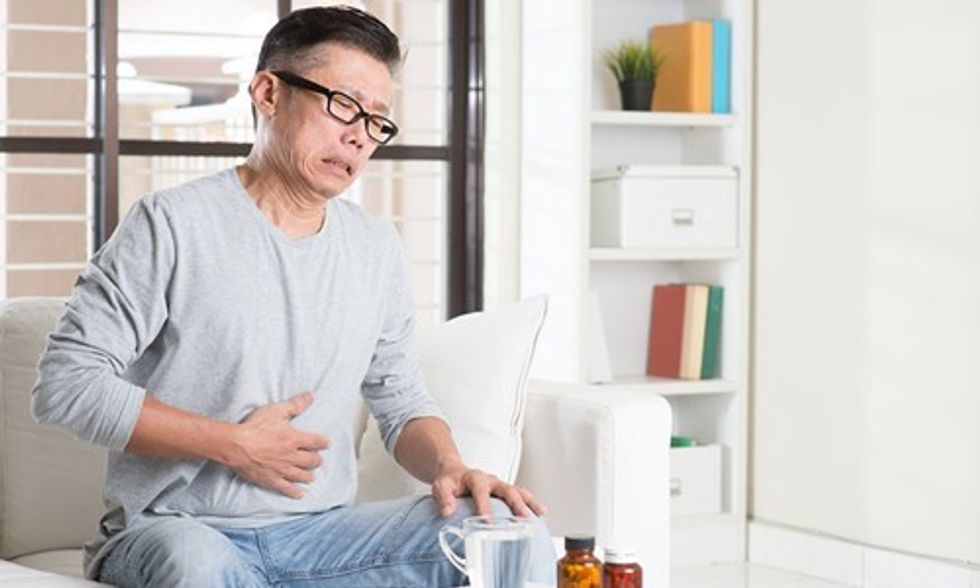 Bloating, it happens to most at one time or another. It is when one’s belly feels enlarged or swollen due to gas or digestive issues that can occur after eating. Sixteen percent to 30 percent of people state they experience bloating regularly.

There are many foods that cause bloating and removing them from one’s diet will normally fix any bloating issue.
Photo credit: Shutterstock

Sometimes bloating can be a sign of a serious medical condition, but more likely than not, bloating is due to something a person eats. There are many foods that cause bloating and removing them from one’s diet will normally fix any bloating issue.

Here is a list of foods that can cause bloating:

As most know, beans are a type of legume. They can be high in protein, healthy carbs, fiber and many minerals and vitamins. However, beans also contain sugars called alpha-galactosides, which belong to a group of carbs called FODMAPs.

“FODMAPs (fermentable oligo-, di-, mono-saccharides and polyols) are short-chain carbohydrates that escape digestion and are then fermented by gut bacteria in the colon. Gas is a byproduct of this process.” (Eat Local Grown)

For those with irritable bowel syndrome, beans can cause serious bloating issues.

Beans to Eat: Soaking beans before cooking can help and pinto and black beans tend to be easier to digest. One can also replace beans with grains or quinoa.

Carbonated drinks contain carbon dioxide gas which is used to give the beverage that bubbly texture. However, when drinking soda, all that gas can go into the digestive tract and cause bloating or even cramping.

What to Drink: Just drink water. It is so much better for the body than a sugary, artificially colored beverage.

Wheat has taken some heat in recent years because it contains a bunch of gluten. This is a serious problem for those who suffer from celiac disease or gluten sensitivity. However, wheat is also a major source of FODMAPs, which can cause digestive problems in many people.

If wheat gives a person digestive issues, there is plenty available to replace it with.

Cruciferous vegetables include broccoli, cauliflower, cabbage and brussel sprouts to name a few. These are very healthy, containing many essential nutrients like fiber, vitamin C, vitamin K, iron and potassium. However, they also tend to give some people issues with bloating.

But don’t worry! There are plenty of vegetables out there that do not create gas.

Vegetables to Eat: Spinach, cucumbers, lettuce, sweet potatoes and zucchini are all great to eat and do not cause bloating.

Onions are a commonly consumed bulb vegetable. It is normally eaten cooked in a dish but can sometimes be found raw on sandwiches or salads.

It is raw onions that give some bloating and gas issues. This is because onions contain fructans which are soluble fibers that can cause bloating.

If cooked onions still gives one issues, there are some alternatives to try.

Onion Alternatives: Give food a punch with herbs and spices and leave the onion out.

Barley is a cereal grain that contains loads of fiber and vitamins and minerals like molybdenum, manganese and selenium. It is the fiber and gluten found in barley that can cause bloating and gas.

Barley Alternatives: Refined barley, like pearl or scotch barley, may be tolerated better. Barley can also be replaced with other grains or pseudocereals like oats, brown rice, quinoa or buckwheat.

Rye is another cereal grain that is closely related to both wheat and barley. It contains high amounts of fiber, manganese, phosphorus, copper and B-vitamins. It also contains gluten.

Like with rye, it is the fiber and gluten that can cause bloating.

Dairy products include milk, cheese, yogurt and butter to name a few. They are well loved but about 75 percent of the public can’t process them. The issue is a sugar found in dairy called lactose and people who can’t processes it have lactose intolerance. This causes bloating and gas.

Dairy Alternatives: Coconut, almond, soy or rice milk are good alternatives to dairy. Coconut milk is tops on my list.

Garlic is fantastic in food and as a health remedy. I personally love garlic and will eat it raw. However, like with onions, the fructans in garlic can give some digestive issues. Cooking the garlic will reduce the body’s reaction to it, but that will not work for everyone.

Garlic Alternatives: Herbs and spices in your cooking, such as thyme, parsley, chives or basil will help food taste almost as good.

Yes. It is true that beer will cause bloating. It is actually a double threat. Beer is carbonated and contains fermentable carbs like barley, maize, wheat and rice, along with some yeast and water. The carbonation and grains work together to create one big digestive problem. Beer also has gluten.

What to Drink: Again, water is the way to go. If one must drink beer, only in moderation.

If cutting these foods from one’s diet has not reduced bloating, it is time to consult with a doctor. As we stated in the beginning of the article, bloating could be a sign of a serious medical condition.