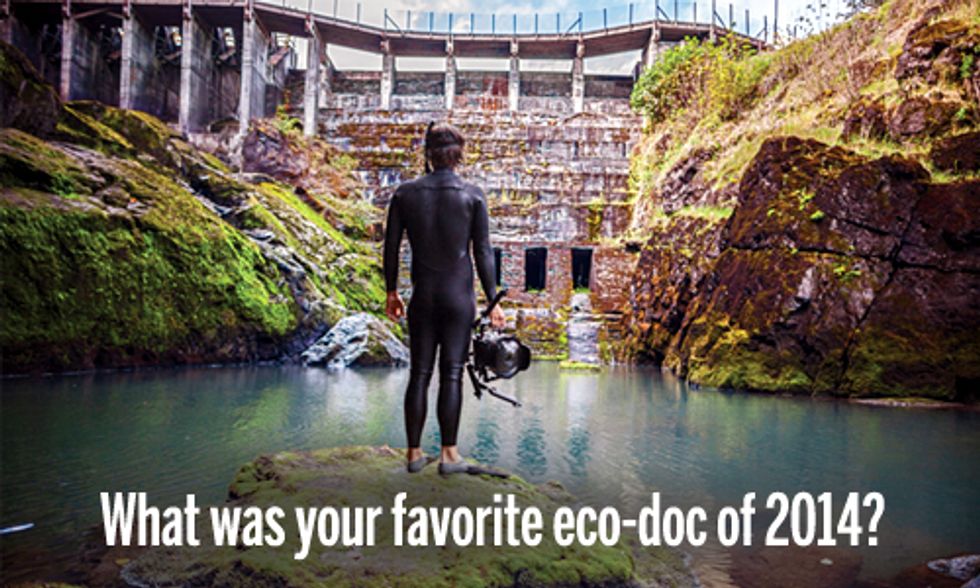 This year brought many inspiring and educational environmental documentaries to theatres and film festivals worldwide. From the Environmental Film Festival in Washington, DC to Mountainfilm in Telluride, filmmakers were working hard to bring light to the most pervasive environmental issues impacting human health and the environment.

DamNation explores the sea change in our national attitude toward big dams from an engineering wonder to the realization that our future is dependent on the life and health of our rivers. After watching a 30-pound salmon hurtling 20 feet into the air in a vain attempt to reach the spawning grounds that lie barricaded upriver confirmed what the creators of this film always thought to be true—too many dams for far too long have been destroying entire watersheds.

Jolynn Minnaar had no intention of making a documentary exposing the evils of fracking. In fact, the Karoo, South Africa native viewed the arrival of a shale gas extraction industry as an exciting opportunity for development and employment in home district.

Her opinion changed after visiting the U.S.

There, she learned about the fires, dark brown, methane-infused water and many more by-products of fracking. She documented her findings in the appropriately titled, Unearthed, which received its world premiere June 10 and 11 at the Sheffield International Documentary Festival in Sheffield, a city in the United Kingdom’s South Yorkshire county.

Just two years after Brave New Films released Koch Brothers Exposed, the company returns with a 2014 edition of the documentary. While the Kochs’ political spending habits haven’t changed much since then, they’re all the more emboldened by the Supreme Court’s historic McCutcheon v. FEC ruling.

With individual donors no longer facing a cap on political contributions, the dark money floodgates are entirely open. That puts a new spin on Brave New Films’ hour-long examination of Charles and Dave Koch, who coincidentally happen to be tied fourth place on the Forbes 400 list.

Filmmakers Francine Strickwerda and Laurel Spellman Smith have made a new documentary Oil & Water telling the story of two teenagers—one American, one Ecuadorian—fighting to restore the country’s rainforests and seeking justice for the indigenous peoples damaged by the effects of oil exploration and drilling. It depicts the challenges faced by the young men and their allies as they fight the power of a Big Oil company, Texaco (now Chevron), that for 28 years poisoned drinking water, destroyed the landscape and pushed the indigenous people to the edges of their lands as it drilled for oil.

What happens when two filmmakers challenge themselves to survive for six months only on discarded food? You get Just Eat It, a new documentary that explores the food waste issue from the farm all the way to a Vancouver fridge.

In January, Predator Defense launched a nationwide film screening tour of their documentary detailing the secretive killings of the Wildlife Services, a department of the U.S. Department of Agriculture (USDA), which kills more than one million coyotes, bears, otters, foxes, birds and other animals each year without any requirement to disclose its activities to the public.

In the film, Exposed: USDA’s Secret War on Wildlife, former federal agents-turned-whistle-blowers go on record to disclose their take on Wildlife Services: an unaccountable, out of control, wildlife killing machine that acts at the bidding of corporate agriculture and the hunting lobby, all with taxpayer dollars.

Burt's Buzz is a quirky portrait of the unique life of Burt Shavitz, the reclusive co-founder and face of Burt's Bees, who reluctantly struggles with fame when all he wants is to just say "buzz off."

The Trail of a Tale

The winner of this year's Action4Climate documentary competition, The Trail of a Tale by Portuguese filmmaker Gonçalo Tocha, is captivating as the narrator tells us, the stranger, how things went right. Society gathered with a fundamental belief that the “purpose of the economic system is to improve the well-being for all within the limits of what the planet can sustain … We had to deal with overconsumption first. The prices we paid for things had to reflect the social and environmental costs…” This film won the $15,000 top prize, in the 18 – 35 age category, and is a must-see.

The Last Rush for the Wild West: Tar Sands, Oil Shale and the American Frontier, by filmmaker Jennifer Eckstrom, talks about another piece of the American landscape under assault from the fossil fuel industry: the strip mining of more than a million acres of tar sands and oil shale in eastern Utah. It addresses the wilderness landscapes that would be destroyed, increased pollution it would bring to already heavily polluted Salt Lake City and threat to the Colorado River watershed, which provides drinking water to 36 million people.

Filmmaker ML Lincoln captures the outrage of Abbey’s friends, the original eco-warriors, through interviews, archival footage and re-enactments. These early activists pioneered monkeywrenching as a way to defend all things wild. The movement was exemplified by EarthFirst! in the early ‘80s when direct action and civil disobedience grew in popularity.