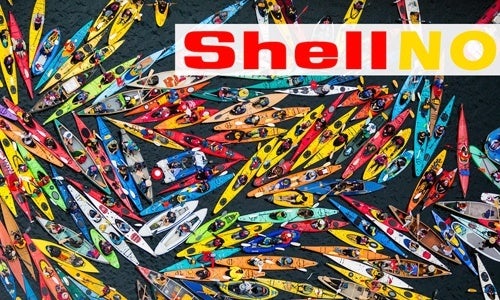 Kayaktivism spread across the country yesterday as people in 13 states gathered for a “Shell No” Day of Action asking President Obama to revoke oil and gas exploration leases in the Chukchi Sea. In Washington DC, activists brought their message right to President Obama’s doorstep by staging an Arctic marine scene in Lafayette Park to protest Shell and other companies drilling in the Arctic Ocean.

Kayaktivists everywhere today, as folks who cares about the Arctic (or climate) say #shellno http://t.co/OxdCI67b7g pic.twitter.com/psGaydxBh5

SHELL NO: We went out on the SF Bay to show our support to #savethearctic http://t.co/qKFuZS0iuO #shellno pic.twitter.com/sS1h5G8Rzc — Earthjustice (@Earthjustice) July 18, 2015

Tell @POTUS to act now to safeguard one of the most fragile ecosystems on Earth http://t.co/O8N5bQI3LQ @NRDC #ShellNo pic.twitter.com/zQg4B7DpLn — Irina Tikhomirova (@IrinaGreenVoice) July 16, 2015

.@potus By land or by sea, #chicago says #shellno! pic.twitter.com/LwXNsmisxP