10 Arrested as ‘We Are Seneca Lake’ Protests Continue 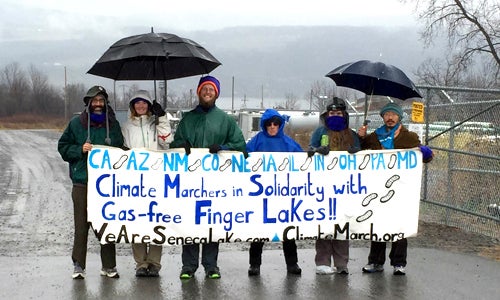 Ten people were arrested Nov. 17 for blockading the gates of Texas-based Crestwood Midstream’s gas storage facility on the shore of New York’s Seneca Lake. This protest marks the fourth week of the “We Are Seneca Lake” campaign to stop the major expansion project at the methane gas storage facility where plans are underway to store highly pressurized, explosive gas in abandoned salt caverns on the west side of Seneca Lake. 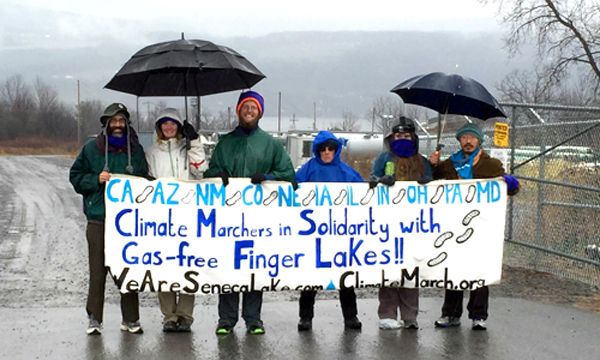 Today’s protest included a number of participants of the Great March for Climate Action who recently finished a 3,000-mile walk from Los Angeles to Washington, DC. Photo credit: Kelsey Juliana

Thirty-five people have been arrested so far during this campaign, including Dwain Wilder who just finished serving eight days in jail after refusing to pay his fine.

Today’s protest included a number of participants of the Great March for Climate Action who recently finished a 3,000-mile walk from Los Angeles to Washington, DC. The marchers arrived in DC on Nov. 1 and then spent a week blockading the entrances of the Federal Energy Regulatory Commission—the federal agency that approved the Crestwood expansion project—where more than 100 people were arrested during the Beyond Extreme Energy protests.

“I am ecstatic to stand beside my fellow climate marchers as I put myself on the line to protect my home today,” said Faith Meckley, a journalism major at Ithaca College who was born in New York’s Finger Lakes region and participated in the Great March for Climate Action, prior to getting arrested today.

“They come from all over the country and they are standing with me because they are my family and they want to protect me and my home. Their presence here goes to show that this is more than just a Finger Lakes or a New York issue. This is a national and even a global one. In a world where fresh, clean water is becoming ever more rare, we are sitting on a priceless treasure here that we may eventually have to share. We need to make sure that Seneca Lake and all the lakes are clean and healthy for generations to come.” 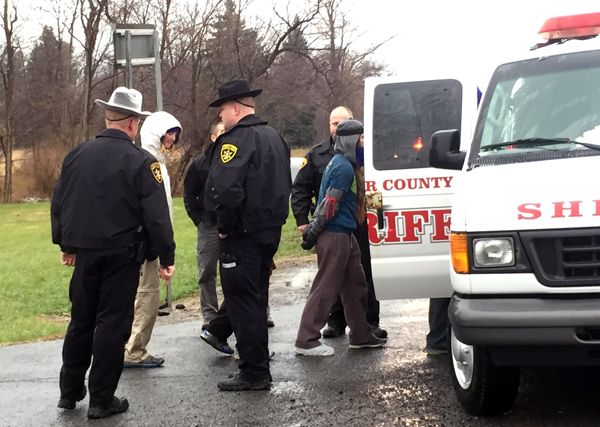 John Abbe from Eugene, Oregon, who was also arrested today, said, “We have walked all the way across the country, from coast-to-coast, and in every state we witnessed cases of environmental and health devastation at the hands of industry. This region is unbelievably beautiful and worth more than all the money in the world. We are standing with Faith today to keep her home from becoming another industrial horror story.”

A large rally is planned for the arraignment of the 16 arrested in earlier actions—including nine of the ten residents first arrested weeks ago, among them Senior Master Sergeant Colleen Boland-U.S. Air Force (retired) of Elmira, author and biologist Dr. Sandra Steingraber of Trumansburg, 76 year old mother and grandmother Jeanne Judson and her son Patrick of the Town of Burdett—on Nov. 19 at 4 p.m. outside of the Town of Reading court at 3914 County Rd. 28, Reading Center, New York 14876.