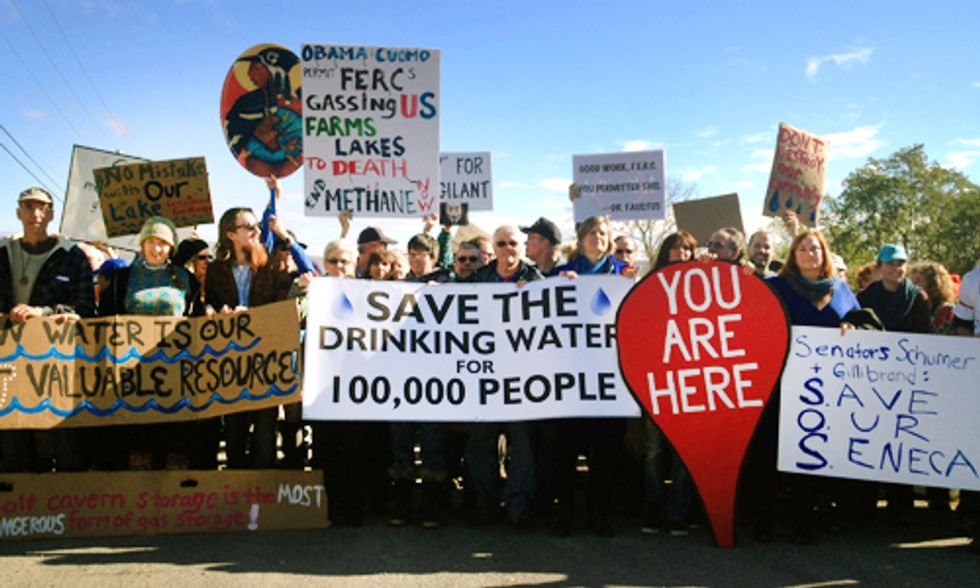 After blockading the gates of Texas-based Crestwood methane gas storage facility on the shore of New York's Seneca Lake for two days last week, including a rally with more than 200 people, the human blockade continues.

For the second morning in a row this week, the "We Are Seneca Lake" protesters are blocking the Crestwood gate with protesters expanding the blockade to include a second driveway. With last Friday marking the day that the construction project on this huge gas storage facility was authorized by the Federal Energy Regulatory Commission to begin, community members, after pursuing every other avenue to stop this project, are participating in ongoing nonviolent civil disobedience as a last resort.

"We are not going away," said renowned biologist and author Sandra Steingraber, PhD. "The campaign against dangerous gas storage in abandoned salt caverns near our beloved lake will continue with political pressure on our elected officials—who should be protecting our drinking water, our health and our wine, and tourism-based economy—and nonviolent acts of civil disobedience."

More than 200 people participated in a rally last week at the gates of Crestwood on the shore of Seneca Lake in New York's Finger Lakes region. Photo credit: Faith Meckley

These community protestors are not the only ones against this project. Last week, the Tompkins County legislature approved a resolution that opposes gas storage on the lakeshore, while the Yates County legislature passed a similar resolution the prior week. These counties now join the Board of Supervisors of both Ontario and Seneca counties, which previously passed motions opposing gas storage, along with the Geneva City Council and the Watkins Glen Village Board that oppose this project.

“As a registered nurse, I know that we need clean drinking water, and it’s important to protect people from all of the insidious byproducts of petrochemical companies," said Coby Schultz a resident of Springwater in Livingston County. "This area is too precious and water is too valuable of resource to exploit so recklessly.”

On Monday, Steingraber joined Thom Hartmann on The Big Picture sharing her reasons why this project must be stopped. Watch here:

Barbara Schiessher of Seneca Lake Pure Waters Association agrees with Steingraber: “The expansion of the Crestwood facility will affect everyone who lives, works or plays on the lake, or consumes agricultural products from the region, including its award winning wines. It will affect the 100,000 residents who get drinking water from the Lake. It increases the likelihood of contamination of our air, soil and water, plus the always present risk of gas leakage, unpredictable explosions and sink holes such as have occurred in a number of salt cavern storage facilities of natural gas and LPG.”

Watch the live stream from today:

Q&A with Bill Moyers: How the Grassroots Movement Must Rise to Challenge Corporate Control