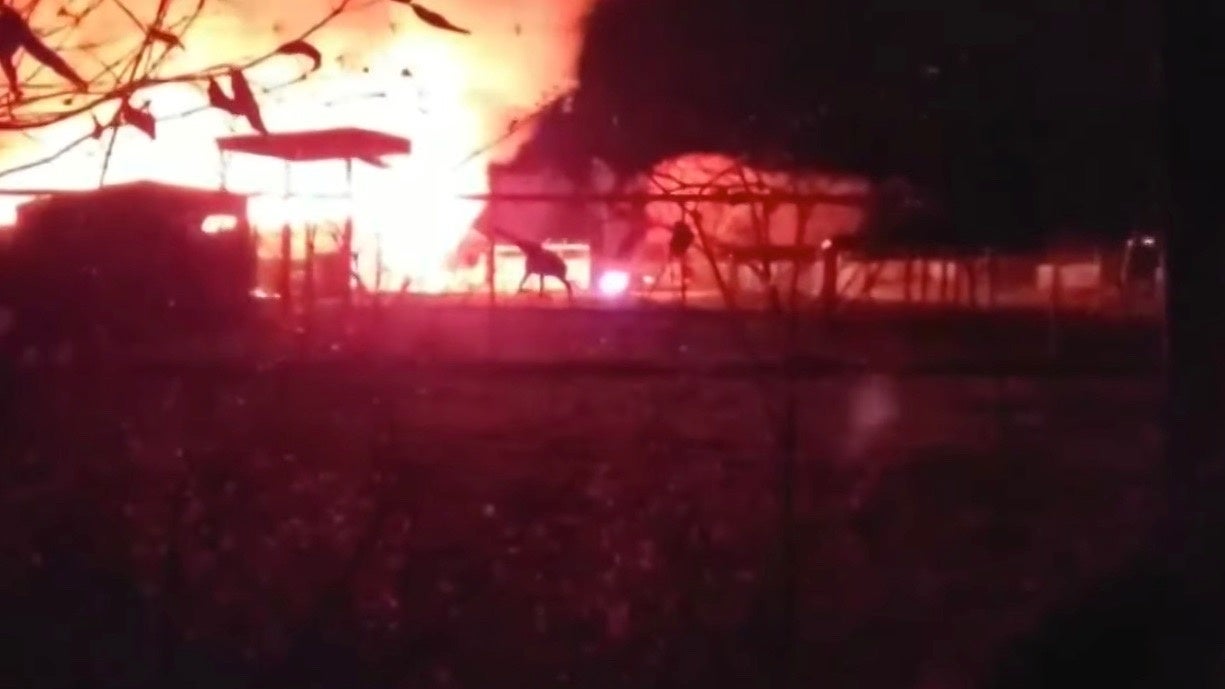 A giraffe is seen running around the wildlife park searching for safety. Youtube screenshot

Officer Carolyn DeMore of the Danbury Township Police said that when she arrived at the blaze yesterday evening, she found a zebra running loose and one of the barns engulfed by the fire, according to the Toledo Blade.

Demore told reporters that three giraffes, three red river hogs, three bongos and a springbok had been inside the barn before the fire and were killed. CNN explained that a bongo is a large forest antelope and the springbok is a medium-sized, gazelle-like antelope.

Holly Hunt, who owns African Safari Wildlife Park in Ottawa County along Lake Erie, confirmed DeMore’s report, as NBC News reported. Hunt told CNN that there are 300 other animals in the park and they are all safe. The 100-acre wildlife park claims to be home to more than 50 different animal species including alpacas, zebras, warthogs, porcupines, tortoises, gibbons and a white alligator. The park offers walk and drive-thru safaris, as well as educational programs and hands-on activities, such as camel rides and animal feedings for rabbits, kangaroos and parakeets, according to the Toledo Blade.

The park was closed for Thanksgiving, so no people were injured. Hunt said that a caretaker first spotted the fire after a power flicker. The wildlife park lost power completely on Wednesday, according to to CNN.

Hunt added that a zebra that was housed in an overhang outside the barn was saved. A giraffe seen fleeing the fire on social media ran into a pond. From there animal keepers and doctors were able to direct it to safety, as NBC News reported.

“It’s just gut-wrenching that this should happen,” said Hunt, as NBC News reported. “Our team works so hard every day to care for these animals.”

“We are grateful that our staff is safe and no one was injured, but the loss of the wildlife that we care for every day is tragic for our team members who love these animals,” said park officials on a Facebook post, as the Toledo Blade reported. “The animals lost in this tragedy were part of our African Safari family, and the Park will be closed on Friday as we mourn their loss and care for the other animals living on the 100-area [sic] Park.”

Firefighters contained the blaze on Thursday but expected to work through the night to extinguish it fully. The cause of the fire had not yet been determined, said Danbury Township Fire Chief Keith Kahler, as CNN reported. He added that the Ohio State Fire Marshall will arrive today to investigate and that firefighters found propane tanks stored inside the barn.

DeMore, who was one of the first responders on the scene, said she heard two explosions in the barn, which a firefighter suspected was the propane tanks exploding, according to NBC News.

“We are devastated by this loss of the animals we care for every day,” said Hunt who appeared to choke back tears, according to NBC News. “The team is just devastated.”