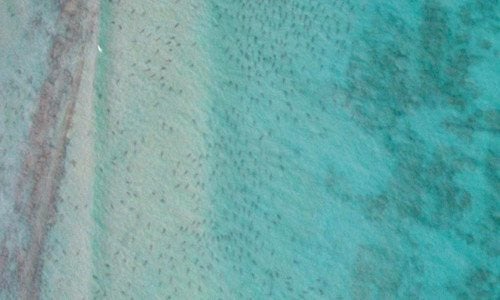 More than 10,000 blacktip sharks are swimming off the coast of some popular beach towns in Palm Beach County, Florida.

Every winter, thousands of these sharks migrate along the Atlantic coast in search of warmer waters to mate and give birth. “But this year they’re further north than usual, bringing them within 100 meters of the shoreline,” ScienceAlert explained.

“It’s not unusual, but it’s great to see them,” shark biologist Stephan Kajiura from Florida Atlantic University told ABC News. “There are literally tens of thousands of sharks a stone’s throw away from our shoreline,” he told CNN affiliate WPEC. “You could throw a pebble and literally strike a shark. They are that close.”

Kajiura is trying to find out why the sharks have stayed near the Palm Beach area this year, rather than continuing further south to the Miami-Dade and Ft. Lauderdale area. He’s also looking into why the sharks are a bit later than usual, as they typically show up in the area in mid-January.

“There’s speculation that this shift could be triggered by El Niño keeping the East Coast unseasonably warm at the end of last year, as well as ocean temperatures increasing further from the equator,” ScienceAlert said.

“One of the ideas may be that as they are getting south, if they are in a suitable habitat, then why not stay,” Kajiura said.

He plans to tag a total of 60 sharks to track how their migration patterns may be changing.

As for whether beachgoers should be concerned, Kajiura said they should be fine as long as they listen to local lifeguards and take regular precautions such as avoiding swimming at dusk and dawn. Lifeguards have not closed any beaches yet, and most locals know this is when the sharks migrate and what precautions they need to take, he said.

Also, the sharks are often more afraid of you than you are of them, Kajiura explained. “For the most part, if you look historically, we have relatively few bites on people by blacktips in this area,” he said. “[T]hese sharks are really skittish, so when you get in the water, they’re going to scatter and go away.”

“The species doesn’t grow much longer than 1.5 meters, and although they’re responsible for the highest number of human attacks each year in Florida, they’ve never bitten anyone fatally,” ScienceAlert noted. The waters off Palm Beach County are also remarkably clear, which helps anyone entering the water easily spot the sharks.

There were a record number of shark attacks in 2015, according to the International Shark Attack File. The number of confirmed, unprovoked shark attacks reached 98 worldwide, surpassing the previous record of 88 set back in 2000. Although, it should be noted the 2015 fatality rate was about half (six deaths: 6.1 percent) of that in 2000 (11 deaths: 12.5 percent). Florida led the nation and the world with 30 unprovoked shark attacks, though none of the attacks were fatal.

The International Shark Attack File noted that we can expect to see an increase in shark attacks as global populations continue to increase and humans spend an “ever-increasing amount of time” in the ocean.