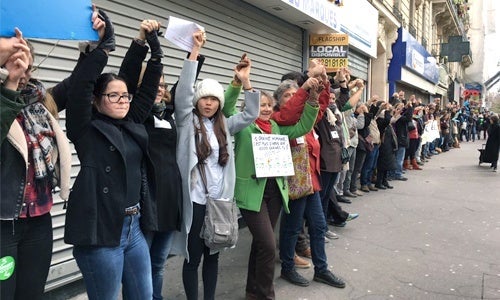 Thousands of Parisians and activists from around the world joined hands to form a human chain along Boulevard Voltaire in Paris this afternoon. According to Agence France Presse, nearly 10,000 people took part in the demonstration.

“We joined hands today against climate change and violence,” said Hoda Baraka, Global Communications Manager for 350.org. “People here in Paris, and hundreds of thousands who are taking part in climate marches worldwide, have a clear message for world leaders: keep fossil fuels in the ground and finance a just transition to 100 percent renewable energy.”

The chain stretched all the way from the Oberkampf metro stop, just down the boulevard from Place de Republique, passed the Bataclan theater, where the tragic attacks of Nov. 13 took place, and down to Place de la Nation. Parents, children, activists and delegates to the COP21 climate talks from around the world joined hands together to call for peace and climate justice.

As the gathering took place in Paris, hundreds of thousands of people took part in Global Climate Marches around the world. Some of the largest marches drew thousands to tens of thousands of people in Quezon City, Sydney, Melbourne, Cairo, London, Tokyo, Barcelona, Berlin, Johannesburg and more. Demonstrators called on politicians to end the use of fossil fuels and finance a just transition to 100 percent renewable energy.

After the tragic attacks of Nov. 13, the French Authorities banned all public rallies and demonstrations, including the planned Paris Climate March. Members of the Climate Coalition 21, the coalition organizing the march, pulled together the human chain as a last minute alternative.

Massive human chain in Paris for #climatejustice. No war, no warming. #COP21 pic.twitter.com/Od9Osyg8sa

“Today’s human chain sets the stage for the creative and powerful ways in which civil society will continue to mobilize throughout the coming weeks as the climate talks unfold in Paris,” said Nicolas Haeringer 350.org campaigner in France. “The movements call for climate justice is more urgent than ever as we see the climate crisis unfold worldwide,” he added.

Organizers intentionally kept the number of participants in the demonstration low and stuck to the sidewalks in order to avoid a direct confrontation with the police. Over the last few days, a number of activists have been placed under house arrest, raising concerns that the French authorities are unnecessarily repressing civil liberties during the State of Emergency. Activists see Sunday’s demonstration as an encouraging sign that more demonstrations may be allowed during the coming two weeks of the climate summit.