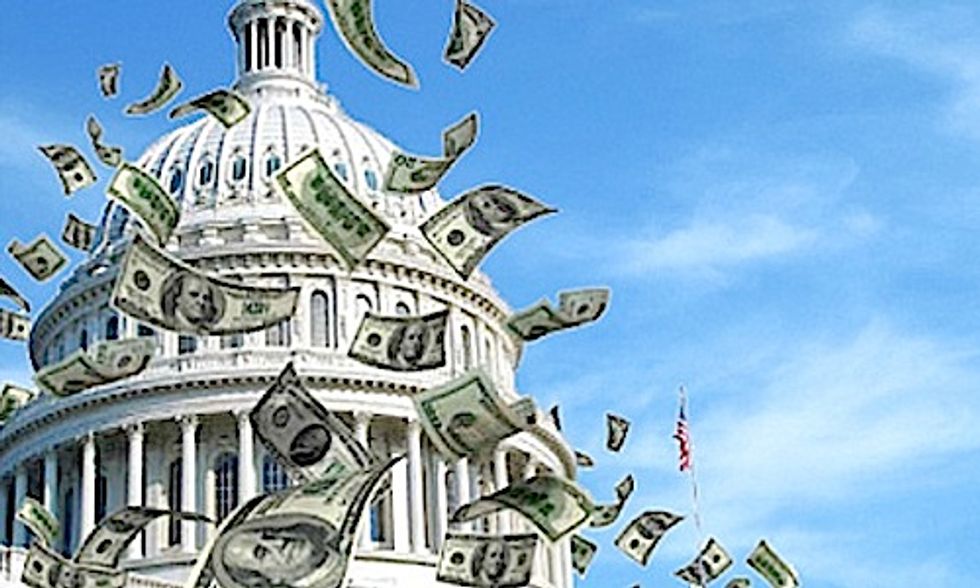 After a period of budget gloom, the $1 trillion spending bill approved by the House and Senate last week brought a little cheer to water programs, which fared relatively well. Some of the harshest sequestration cuts have been restored.

Among the programs that were saved from budget cuts include the Great Lakes Restoration Initiative and the U.S. Geological Survey’s water resources program.

The bill will add  $10 million to the U.S. Geological Survey’s water resources program, a five percent increase. Within the program, an additional $6 million has been made available to expand the stream gauge network. The water resources research institutes, which study water issues unique to each state, get $6.5 million after President Obama requested only $1 million.

The U.S. Environmental Protection Agency (EPA), a beloved scapegoat for House Republicans, does not fare as well. The agency’s budget is cut by 1.6 percent. The House appropriations budget summary boasts of slashing the EPA’s spending authority by 20 percent since 2010.

Yet the budget agreement spared a few EPA programs. The President requested a severe cut to the state revolving funds, which provide low-interest loans for drinking water and sewer infrastructure. Congress rejected those cuts and allocated $2.4 billion to the funds—roughly equal to fiscal year 2013, said Rep. Calvert (R-CA), the chair of the interior and environment appropriations subcommittee.

“The state revolving funds continue to have broad, bipartisan support in Congress because the program addresses a significant need to upgrade water infrastructure around the country,” Calvert wrote in an email to Circle of Blue.

The Great Lakes Restoration Initiative also sees a bump. One of the federal government’s largest environmental programs, the initiative will get $300 million, an increase of $50 million. Funding is still far below what was envisioned in a 2010 restoration plan, which assumed $475 million would be allocated each year.

The spending bill also includes foreign policy provisions. At the urging of Sen. Leahy (D-VT), the bill instructs the U.S. delegations to international financial institutions such as the World Bank to oppose loans or policies that support large hydroelectric dams.

“It’s the strongest language on dams we have seen from Congress,” Peter Bosshard, the policy program director for International Rivers, told Circle of Blue.

Bosshard noted that even though the U.S. is the largest shareholder in the World Bank it holds less than 20 percent of the voting shares.

“It’s likely the World Bank will say it is not bound by what your Congress wants us to do,” Bosshard said.

The spending bill comes with an even more specific policy directive. In the 1980s, construction of Chixoy Dam in Guatemala caused a loss of homeland and loss of life for indigenous peoples after the military and police killed an estimated 376 people living near the dam site. The dam was partly financed by the World Bank and the Inter-American Development Bank. In the last decade, a reparations movement has slowly gathered steam.

Now, Congress has ordered the U.S. delegates to those banks to report on progress being made to implement a reparations plan that the Guatemalan government agreed to in 2010 but never signed. Congress also directed the State Department to withhold aid to the Guatemalan army if the country is not taking “credible steps” to move ahead with the reparations plan.

Mining copper and gold at a proposed site in southern Alaska would wreak havoc on the world’s largest sockeye salmon fishery and native Alaskan tribes, according to an EPA assessment.

“Large-scale mining would cause significant near and long term risk to salmon and native cultures,” said Dennis McLerran, an EPA regional administrator whose domain covers Alaska and the Pacific Northwest.

Depending on its size, the mine would block, eliminate or suck dry between 38 and 151 kilometers (24 and 94 miles) of streams.

A dam to hold the mine waste could reach as high as 209 meters (685 feet), which would be one of the nation’s tallest dams. The ore in the Pebble deposit is low-grade, meaning that 90 percent of what is mined would be waste, according to Jeff Frithsen, a senior scientist at EPA’s Office of Research and Development.

The report, which underwent two rounds of peer review, analyzed how three mine sizes would alter rivers, habitats and native cultures in the Bristol Bay watershed. The mine scenarios were based on data developed by Northern Dynasty Minerals, the main partner in the mining proposal.

Even though the report concludes that the mine would fundamentally alter society and ecology, McLerran stressed that the document did not foretell any regulatory decision or the agency’s response to the nine native Alaskan tribes that petitioned the EPA to take action.

“This is the scientific foundation for how we will respond,” McLerran said.