1 Million Gallons of Mine Waste Turns River in Colorado Orange 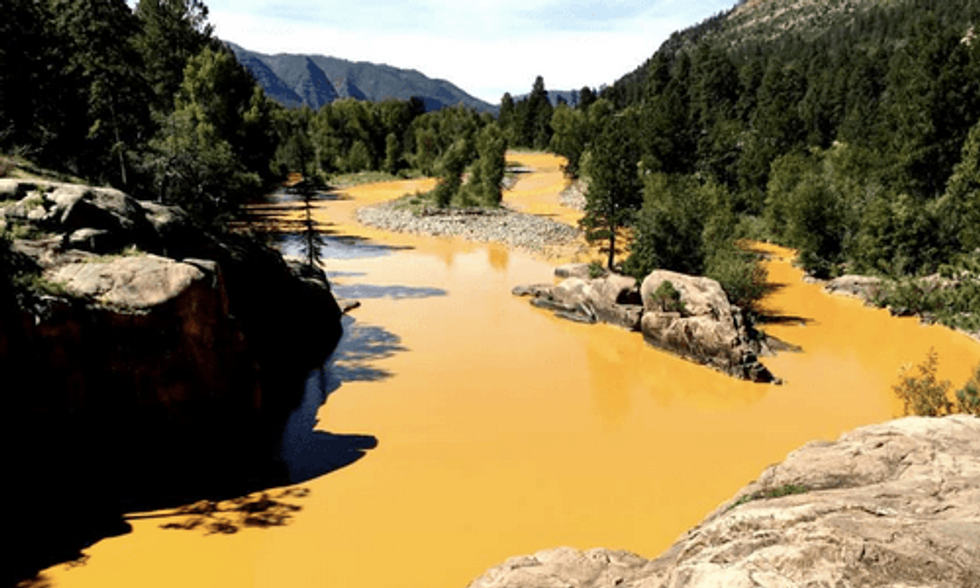 The Animas River in southwest Colorado turned bright orange on Wednesday after a mining and safety team working on behalf of the U.S. Environmental Protection Agency (EPA) spilled a million gallons of mine waste from the abandoned Gold King Mine in San Juan County.

The sediment plume in Durango, Colorado. The river is an important secondary source of water for the city.
Photo credit: La Plata County Emergency Management

According to the AP, the team was working with heavy equipment to secure an entrance to mine when they accidentally triggered the large gush that reportedly caused the Cement Creek's water levels to rise two to three feet.

"The project was intended to pump and treat the water and reduce metals pollution flowing out of the mine," EPA spokesman Rich Mylott said in a statement.

San Juan County health officials said that the acidic mine water associated with the release contains high levels of sediment and metals. EPA teams are conducting sampling and visual observations and monitoring river conditions over the next several days.

David Ostrander, director of EPA's emergency response program in Denver, informed the AP there is no threat to drinking water from the spill, however downstream water agencies were warned to avoid Animas water until the plume passes. Ostrander noted that the acidic sludge could irritate the skin.

In a precautionary measure, nearby residents have been warned by local officials to avoid consuming the water as the deluge made its way to La Plata County, Colorado yesterday. In particular, the city of Durango—which uses the river as a secondary source of water during the summer—has been advised to stop pumping raw water from the river, the Durango Herald reported.

Steve Salka, Durango's utilities director, told the publication that residents need to conserve as much water as possible over the next few days until the water is safe to use.

The Animas River has also been temporarily closed to all watercraft and other flotation devices from the north county line (San Juan County, Colorado) to the south county line (at the Colorado/New Mexico State line).

“This decision was made in the interest of public health after consultation with the Environmental Protection Agency, the Colorado Department of Health and Environment, San Juan Basin Health Department and representatives of the Southern Ute Indian Tribe,” advised Sheriff Sean Smith. “This Order shall remain in effect until it is determined that the river is safe. EPA test results of the Animas River are expected within 24-48 hours, and the Order will be re-evaluated at that time.”

As the spill heads down river to New Mexico, officials in the city of Farmington "have shut down water-supply intake pumps to avoid contamination and advised citizens to stay out of the river until the discoloration has passed," according to the AP.

San Juan County Emergency Manager Don Cooper said residents should not panic because the EPA had told the county the spill would not harm people, adding that the primary pollutants were iron and zinc, The Farmington Daily Times reported.

"It's not going to look pretty, but it's not a killer," Cooper told the paper.

The impact on wildlife is currently unknown, as there are no fish in the Cement Creek watershed because of longstanding problems with water quality, the EPA told The Durango Herald.

Still, Colorado Parks and Wildlife has placed fish inside cages in the Animas River to see if the pollution affects them. "We'll see if those fish survive," spokesman Joe Lewandowski told the publication. "We're also monitoring to make sure we don't get infiltration into the hatchery, because that could be a problem."

Check out drone footage of the contamination in the video below: