1 in 5 American Animal Species Is at Risk of Extinction 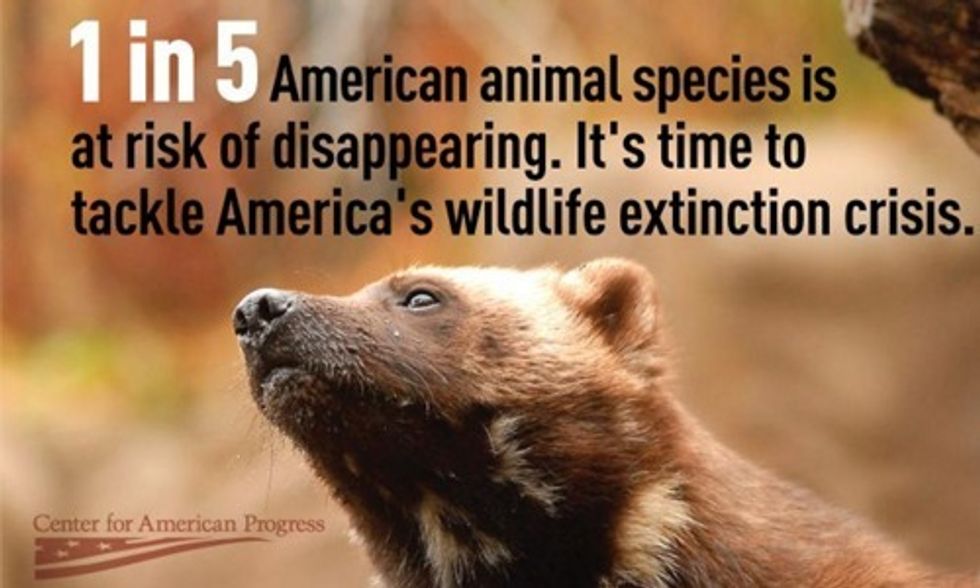 American environmental policy faces a sobering reality: The U.S. has enacted and implemented some of the world’s most effective wildlife conservation laws, yet U.S. wildlife populations are still in perilous decline. One in five animal and plant species in the U.S.—nearly 1,300 total species—is at risk of extinction. Among mammals, the populations of more than two-thirds of all imperiled species in the U.S., from the wolverine to the polar bear, are falling.

The decline of American wildlife is consistent with what experts are calling a global “sixth mass extinction” in which species are disappearing at a rate that is 100 times to 1,000 times higher than before humans were present. Scientists have documented 899 extinctions in modern human history but acknowledge that tens of thousands of lesser-known or undiscovered species have likely perished without record.

Human causes—such as deforestation, climate change, urbanization, habitat fragmentation, pollution, overhunting, overfishing and the global transport of invasive species and diseases—have accelerated the pace of extinction in the past two centuries. Wildlife population surveys show that more than 22,000 species are now at risk around the world. “Each year sees the disappearance of thousands of plant and animal species which we will never know, which our children will never see, because they have been lost for ever,” wrote Pope Francis in “Laudato Si,” his encyclical on the environment. “The great majority become extinct for reasons related to human activity.”

For U.S. species that are hurtling toward the brink of extinction, the Endangered Species Act (ESA), is the steel guardrail between them and oblivion. Fewer than one percent of species protected by the ESA are recorded as later going extinct. If not for the ESA, scientists estimate that at least 227 additional American wildlife species would have gone extinct since 1973.

The ESA is an indisputable success in preventing the extinction of American plants and animals, but because it focuses on species that are already in dire peril, it alone cannot arrest and reverse the widespread decline of American wildlife. The unprecedented scale of the wildlife crisis in the U.S. requires policymakers to develop new tools and strategies to halt the decline of wildlife species before they become imperiled and need the protection of the ESA.

This report proposes the establishment of a new category of wildlife designation—at risk—that would apply to species that are declining but do not yet have or merit protection as a threatened or endangered species under the ESA. The designation of a plant or an animal as at risk would enable federal, state and local leaders to better coordinate existing conservation programs, incentives and investments to encourage voluntary species protection and recovery efforts. Federal and state policymakers should also work to increase the availability of funding and resources dedicated to conserving at-risk species and their habitats. These investments and a clearer focus on early, voluntary conservation of rare and declining species would reduce the likelihood that they will require the mandatory legal protections of the ESA.