1,500+ New Yorkers Rally Against Fracking at Gov. Cuomo’s State of the State Address 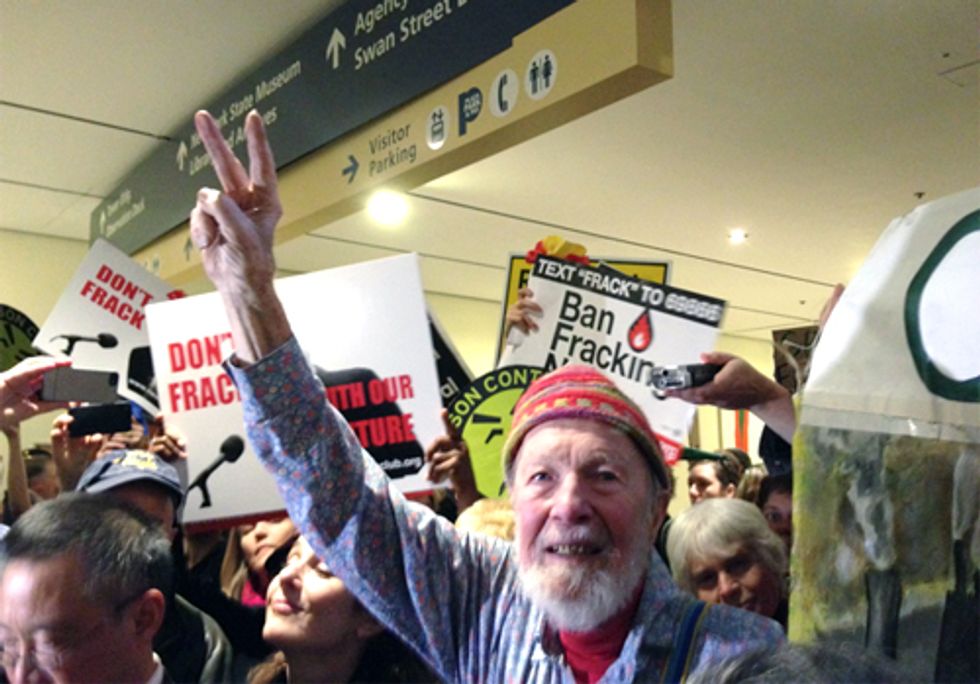 Pete Seeger joined more than 1,500 New Yorkers from every corner of the state today to rally against fracking outside of Governor Andrew Cuomo’s State of the State address.

More than 1,500 New Yorkers from every corner of the state descended on Albany today to rally against fracking outside of Governor Andrew Cuomo’s State of the State address. The group delivered a clear message calling for the governor to reject fracking, implement a statewide ban, and be a leader in clean, renewable energy for New York and the nation.

“New Yorkers simply want Governor Cuomo to listen to the people he represents and would be most impacted by fracking, not the gas industry,” said Natalie Merchant of New Yorkers Against Fracking. “We love our state and don’t want to see it permanently damaged by fracking just so the gas companies can make profits and leave us with the economic, health and environmental costs of their mess.”

Governor Cuomo’s State of the State address, which is expected to include the announcement of initiatives to address climate change and protect the environment, comes just days after a coalition of national environmental and progressive groups sent him a letter urging his leadership on climate change. The letter’s release came on the heels of new data from researchers at the National Oceanic and Atmospheric Administration showing methane leaks from natural gas production at an alarming rate that was twice as high as its previous study and industry estimates. The evidence further undermined arguments about natural gas’ environmental benefit and the data did not even include other methane leaks that occur during storage and transfer in pipelines.

“Hurricane Sandy devastated New York, inflicting billions in damages,” said Phil Aroneanu, campaign director of 350.org. “Opening New York to hydrofracking would be opening the floodgates for more Sandys now and in the future—that's not a legacy we should be leaving our kids and grandkids.”

Protesters highlighted the environmental and health dangers that allowing fracking would pose to the state, as well as the economic dangers. Since fracking began in states outside of New York, there have been numerous reports of water contamination with studies linking fracking-related activities to contaminated groundwater, air pollution, illness, death and reproductive problems in cows, horses and wildlife, and human health problems. Rather than undertake a comprehensive health impact assessment of fracking, the Cuomo administration instead has hired outside experts to review its own internal health evaluation but released fracking regulations before the health review’s completion. The administration has also refused to release any substantial information on the review and placed gag-orders on the outside health experts.

“Fracking will jeopardize the health of millions of New Yorkers,” said Sandra Steingraber of Concerned Health Profesionals of NY. “The Cuomo administration’s refusal to conduct a comprehensive health impact assessment is unacceptable. The secretive health review it instead decided upon is also unacceptable. And non-disclosure agreements for those paid with taxpayer money to review DEC’s work? That’s just shameful. The health of New Yorkers is far too important to be decided by a secret review of a secret review.”

The exaggerated economic benefits touted by the gas industry and the faulty economic analysis of the New York State Department of Environmental Conservation (DEC) have been criticized by New Yorkers and economists.

“New Yorkers continue to express to Governor Cuomo and our state government that we don’t want our air, health or water poisoned by fracking,” said actress and longtime Sullivan County resident Debra Winger. “Regulations cannot minimize the risks and we want our governor to move New York forward by leading us into an era of clean energy and away from dirty fossil fuels and the fantasies the gas industry is peddling.”

The gas industry has poured millions of dollars into New York to influence state government through campaign contributions to elected officials and lobbying. In July, a Freedom of Information Act request by the Environmental Working Group revealed gas industry lobbyists were given preferential access to draft regulations by DEC, allowing them to lobby for changes before the regulations were released to the public. A few weeks ago, Common Cause released an analysis of campaign contributions from the 2012 election cycle showing pro-fracking interests contributed nearly $400,000 to candidates for state legislature and county executive in New York’s Southern Tier. In some races, contributions from pro-fracking interests were more than 20 percent of a candidate’s total fundraising.

Governor Cuomo is weighing whether or not to allow fracking in New York State. With or without regulations in place, fracking is a menace to public health and will produce hazardous air pollution and endanger the state’s food and water.

“Governor Cuomo, don't do this,” said Logan Adsit, a resident of Pharsalia in Chenango County, which is located in the Southern Tier that the Cuomo administration has indicated as a target of fracking. “Don't poison my family. Don't poison anyone's family. This state, which my family has called home for generations, should not become your toxic legacy. That's what I've come here to say today."

The group of New Yorkers rallying was also joined by folk artist Pete Seeger, who warned Governor Cuomo in a video message that he risks his family’s legacy if he moves forward with fracking.