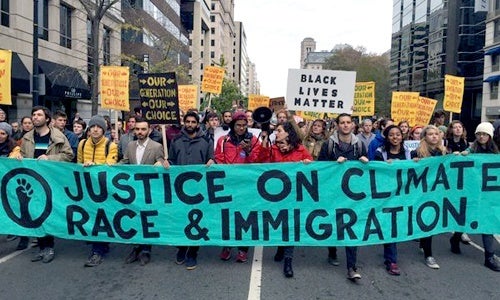 One year out from the presidential election, nearly a thousand youth from across the country took to the streets of Washington, DC to demand that candidates and elected officials adopt an agenda that delivers racial, immigration and climate justice.

Whose streets? Our streets! #OurGenerationOurChoice marching to the White House pic.twitter.com/TfaCloiV0a

College students and young people from across the country assembled early Monday morning in Franklin Square where they held a rally with speakers from immigration rights, social justice and climate movements. The speakers shared personal stories about the impacts of climate change, racial inequality and immigrant injustice in the daily lives of their families and communities.

Activists are requesting to meet with every presidential candidate to hear how they plan to deliver a justice agenda for the youth generation.

Singing, painting and calling for justice outside the White House. #OurGenerationOurChoice pic.twitter.com/iwbaYGghe2

“The voices of those that have gone unheard for too long will be heard in this moment,” said Dante Barry, executive director of Million Hoodies. “A cross-section of youth activism have come together to say that change is something that we demand, and the time to act upon it is now. From environmental to criminal justice, the country we live in today does not reflect the beliefs of the population it comprises. We are here to take a stand, and to make our mark for a better future for the next generation. As we strive to strengthen the democratic process, we aim to empower those that have not yet found their voice while giving power back to people in communities across the nation to show that we are standing together, stronger than ever today. We will continue to work tirelessly and in solidarity until our goals are achieved.”

As the march headed toward H-street, the crowd shut down business-as-usual and held the intersection outside the White House for over two hours. During that time, participants centered around music and art, featuring speak-outs, street murals and the creation of a giant parachute banner. Chants of “The youth are rising, no more compromising” and “I believe that we will win” rang out across Lafayette Park.

“Immigrant communities continue to be criminalized, and we are here today to demand justice. Rogue agencies like Immigration and Customs Enforcement (ICE) continue terrorizing our communities and continue tearing people from their loved ones,” said Greisa Martinez, advocacy coordinator with United We Dream, the largest immigrant youth-led organization in the nation. “Our political system is failing communities of color, and as 2016 approaches, it is up to us to demand real moral leadership for our communities. Candidates can’t simply rely on tired talking points, but instead must propose real solutions that allow people like my mother, Elia Rosas, to live with full dignity.”

The “Our Generation, Our Choice” action signaled the emergence of a powerful new alliance between different youth movements who are finding common cause in the lead up to the 2016 election. Youth have united around a common list of demands including calls to keep fossil fuels in the ground; protect and respect the dignity and lives of immigrants, and black, brown and poor communities; reinvest in healthy jobs, renewable energy, and overall, an economy that works for all. Monday’s demonstration was coordinated by United We Dream, Million Hoodies Project, Fossil Fuel Divestment Student Network and supported by groups like 350.org.

“More than ever, our government must stop pouring resources into destructive, outdated systems that put profit before people. Together, the thousands of youth who risked arrest in demanding justice will continue to fight back against the violence that destroys our communities and our planet,” said Yong Jung Cho, campaign coordinator with 350.org. “In the last week, we have seen the tide turn against the fossil fuel industry and the extractive economy that it represents. History will show that organized people beat organized money. People power is the only thing that has ever created change, and we are unstoppable when we stand together.”

"We will not stop, we will not surrender, we are the ones they will remember." #OurGenerationOurChoice pic.twitter.com/TxXfiRxS1a

Led by young people, these organizations will continue to work together and to engage in the democratic process in pushing politicians to focus their agendas in the realities of the major crises of our time.