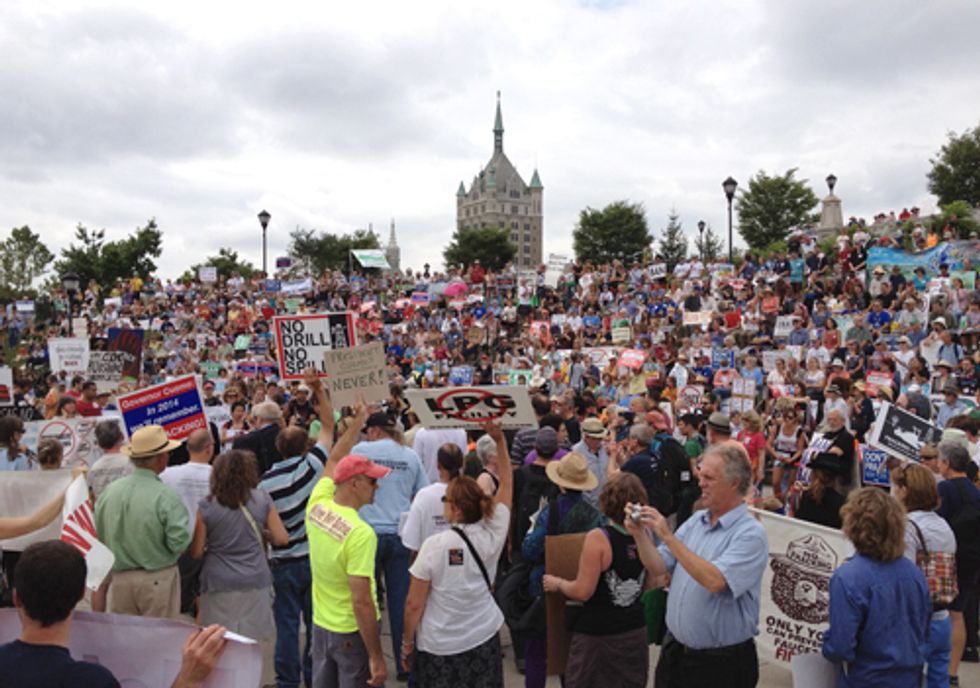 Today more than one thousand New Yorkers staged a massive march and rally in Albany to highlight the dangers of fracking. They marched from Corning Preserve Riverside Park to the Department of Environmental Conservation (DEC) and the West Capitol Lawn.

“As a scientist and a mother, I am urging Gov. Cuomo and the DEC to choose to protect New Yorkers from the dangers of fracking,” said Sandra Steingraber, distinguished scholar in residence at Ithaca College and co-founder of New Yorkers Against Fracking. “The DEC hasn’t conducted an independent study of the health impacts of fracking, and the science shows that fracking can be devastating to people’s health.”

Accidents and spills at drilling and fracking sites contaminate land, risking farmland and streams.i Contamination of underground sources of drinking water with methane and other hydrocarbon gases is a common problem.ii Local air pollution also accompanies drilling and fracking, and there are numerous reports of mysterious health problems linked to such pollution.iii Intense truck traffic destroys roads and increases the likelihood of dangerous accidents and spills.iv

Street theatre at the DEC illustrated the inappropriate collusion between the gas industry and the DEC in writing the Supplemental Generic Environmental Impact Statement, how independent scientists and experts have been excluded from the process and how having Brad Field as director of the Division of Mineral Resources derails the legitimacy of the DEC's review of fracking given that Field is on record as a climate denier. Given the state of the study and review, the public's faith has been broken and Gov. Cuomo would have no ground upon which to stand in saying that fracking can be done safely.

Bill McKibben, founder of 350.org, speaks at the Don't Frack NY Rally and March on Aug. 27.

Bill McKibben, author and founder of 350.org, said, “In this brutally hot summer, it was a real slap in the face to learn that Gov. Cuomo had turned over the environmental review of fracking to a global-warming denier. And amidst the drought plaguing America, it’s almost unbelievable that New York State would put its unparalleled water resources at risk.”

In total, more than 3,000 people signed a new Pledge to Resist Fracking in New York leading up to the event following signals that Gov. Cuomo is considering releasing final fracking regulations and lifting New York’s moratorium. The pledge lays out that stopping fracking is necessary to prevent the destruction and poisoning of New York’s water, air and food systems on which life, health and economic prosperity all depend—including that of future generations. The 1,000+ participants at the demonstration today delivered the pledge to the governor’s office.

"Over the last few months, opposition to fracking in New York state has continued to grow, with over a thousand businesses, hundreds of artists and local opposition in the Southern Tier,” said Dave Publow from United for Action in New York City. “Given how dangerous fracking is to our water, many of these opponents have already committed to civil disobedience to ensure that fracking doesn't go forward."

“The gas industry’s own science tells us that six percent of wells will leak immediately upon drilling and 50 percent will leak over a 30-year period. There is no known way to fix this problem and the gas industry knows it,” said Gasland filmmaker Josh Fox. “This means the contamination of New York’s water is certain. Surely Governor Cuomo must listen to the science and roundly reject this industrial proposal. We can develop more jobs and energy by announcing that New York aims to lead the world in renewable energy development.”

State Sen. Tony Avella, Ranking Minority Member of the Senate Environmental Conservation Committee and author of a Senate bill banning hydrofracking (S.4220), stated, "With reports indicating that a decision on allowing hydrofracking in New York State is expected very soon, it is more important than ever to rise up and make our voices heard—hydrofracking is an extremely dangerous drilling practice and cannot be allowed in this State. Residents in other states that have allowed hydrofracking have paid too high a price, with contaminated water, increased seismic activity, crumbling infrastructure and lower property values. New York must learn from the disastrous effects of what hydrofracking has done in neighboring states like Pennsylvania and take the lead in banning this dangerous practice. The battle over hydrofracking has reached a climax and with the health and safety of millions of New Yorkers on the line, it is a battle that we cannot afford to lose.”