1,000+ March in DC Demanding a Halt to Fracked Gas Exports 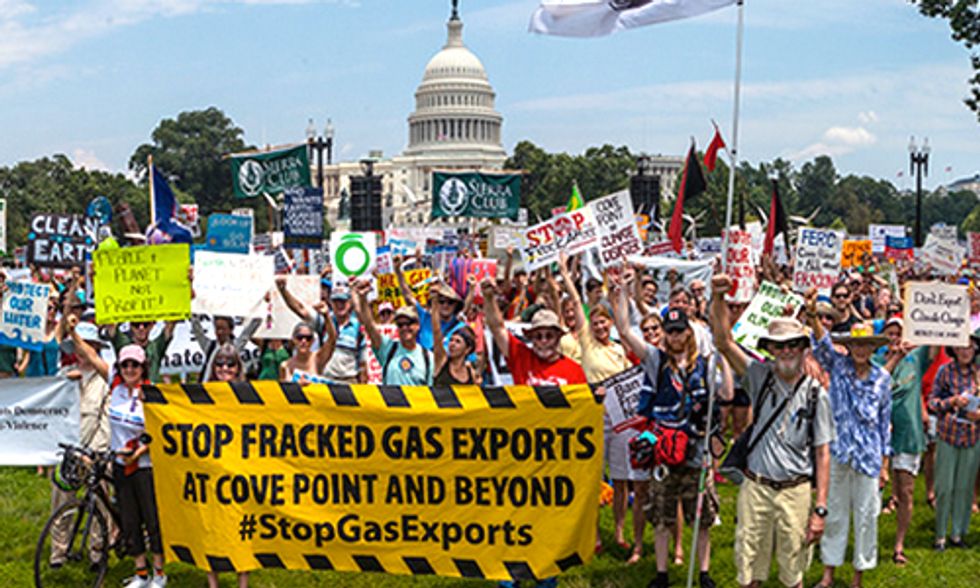 [Editor's note: More than 1,000 people from across the Mid-Atlantic region and beyond joined a first-ever “people’s march” in DC to protest the gas industry’s push to export liquefied natural gas (LNG) from U.S. coastlines. With a key decision nearing on the Cove Point export terminal, just 50 miles south of the White House, protesters are calling on President Obama and the Federal Energy Regulatory Commission to halt approval of all LNG export projects and instead promote renewable energy solutions.]

I’m Sandra Steingraber, and I bring you greetings from my big-hearted friend, Bill McKibben, who sends you his love. And I also bring greetings from the unfractured state of New York. That’s where I live.

I was born and raised in the Midwest, but it was New York that taught me how to fight. And we New Yorkers Against Fracking pledge our support, assistance and solidarity with our brothers and sisters in Maryland who are fighting the LNG terminal in Cove Point. Our destinies are intertwined. Our success depends on yours.

Dryden is located across the lake from my own village. And a few years ago, Dryden became one of the first towns in New York to use zoning laws to ban fracking within its municipal borders.

Lots of people warned the citizens of Dryden not to do it, pointing out that a local ban on fracking would only invite ruinous lawsuits by armies of industry lawyers.

And that’s exactly what happened.

All the citizens of Dryden had was sheer determination, a sense of their own righteousness and a willingness to do whatever it took, including walking door to door in the dead of winter to gather signatures on petitions.

And guess what? Two weeks ago, on June 30, the New York Court of Appeals—the highest court in the land—ruled in favor of Dryden, upholding their right to use zoning laws to ban fracking and control their own economic destiny.

Dryden beat Goliath with a slingshot made out of a zoning ordinance and so set a precedent that is now reverberating around the world.

The rally began near the U.S. Capitol and culminated with a mile-long march to the doorstep of FERC. Photo credit: Sat Jiwan Ikle-Khalsa

I spent the fourth of July at a victory party with the members of the Dryden Resource Awareness Council. And you know what the conquering heroes talked about at the potluck dinner? The tomatoes in their gardens. Their grandchildren. Recipes for blackberries. Their arthritic knees and hips.

Did you catch that? The people of Dryden, who brought the world’s largest industry to knees, have arthritic knees. But they are motivated by love. Love for the place where they live and love for the people who will come after them. They feel a responsibility to protect what they love.

Because that’s what love means.

Now let me tell you about another small community in New York State. It’s called Rossville, and it’s located on Staten Island.

When you go to Rossville, the first thing you see are two hulking, ten-stories-tall tanks. They cast a shadow over the whole community. They are 40 years old, and they are empty. They’ve always been empty. They are rusting and birds fly in and out of them.

They were built to hold LNG, but they were never filled with LNG.

Why? Because of the actions of a community group in Rossville called Bring Legal Action to Stop the Tanks (BLAST).

BLAST worked for 13 years to close those tanks down. They ignored the counsel of those who said that it couldn’t be done. That the tanks were already built. That of course they would be filled with LNG. That it was all inevitable. That you couldn’t fight the Federal Energy Regulatory Commission.

But in the end, BLAST won.

Among the leaders of that community group were Gene Cosgriff and his wife Edwina. Their house was located right next to one the tanks. They knew they could be instantly vaporized if an explosion occurred there.

Why didn’t they just move? Because Gene and Edwina had 18 children and very little money. Their church had helped them find this house, and they knew they had no alternative but to plant their flag and fight. Gene and Edwina Cosgriffe spent 13 years protesting, testifying and attending every public hearing. They were also motivated by love.

And they were compelled to redouble their efforts in February 1973 when another LNG tank on Staten Island’s northwest shore blew up, crushing 40 workers to death. The firefighters on the scene said that the resulting fire was like something out of Dante’s inferno.

That tank was empty too, but had been filled with LNG months earlier, and investigators said the explosion was triggered by pockets of gas trapped in the tank’s liner.

That explosion mobilized thousands of Staten Islanders to begin a fight to ensure a similar disaster would never happen again.

In the wake of this accident, New York City mayoral candidate Abraham Beame—who won his election—said the following:

"So far, there has been general agreement that the gas company took every precaution for the prevention of the tragedy which did occur. Therefore, if forty men died when a supposedly safe and empty tank exploded, what are we to expect when tanks are filled and one or another precaution is not taken through either human or mechanical oversight?”

Thanks to the work of BLAST—and the elected officials who listened—we have a ban on LNG facilities in New York State.

Today’s protest united more than a thousand people from New York to Maryland to Louisiana, including many who would see firsthand impacts from the gas industry’s proposed export build-out. Photo credit: Jim Dougherty

My friends, the baton that Gene and Edwina Cosgriffe carried in 1973 has been passed to us.

And what has changed since the terrible LNG conflagration killed 40 people 40 years ago?

Nothing about the inherent hazards of LNG has changed.

LNG is still a cryogenic fluid that must be stored at minus 259° F.

LNG is still heavier than air.

If spilled, LNG will still slither down drainage and sewer pipes and spread underground.

And as it disperses, an LNG vapor cloud is still combustible. Once ignited, an LNG pool fire still creates high winds that spread thermal heat to distant locations, trigger other fires and burn human flesh hundreds of feet away.

And, as in 1973, an LNG fire is still not extinguishable by any known firefighting technique.

Our stakes today are so much higher. So, as we go about our work—to do for Cove Point what the people of Rossville in Staten Island did for New York—we have something else to say in answer to Mayor Beame’s good question, “what are we to expect when the tanks are filled?," and it is this:

To the Federal Energy Regulatory Commission and President Obama: we are not willing to blow up the bedrock of our nation in order to extract the fossil fuel called methane that will, in turn, blow up our climate. And we are not willing to liquefy the results using more fossil fuels and give that methane a passport to foreign markets and so further entrench fossil fuel dependence around the globe in a time a climate emergency.

And in doing the hard work to stop the Cove Point facility—which is, first and foremost, a human rights struggle—we need to know that we don’t have to be tireless and fearless.

They fought with their whole hearts. And that is what we are here to do. They fought to win. And they did win.

And because we are fighting for life itself, and because we have science, economics and human rights on our side, and because we all lose if the gas industry gets to use our drinking water as a club to frack the bedrock beneath our homes and so turn our communities into a methane extraction colony, I am intending also to win.