1,000+ March Against the Northern Gateway Tar Sands Pipeline in Vancouver 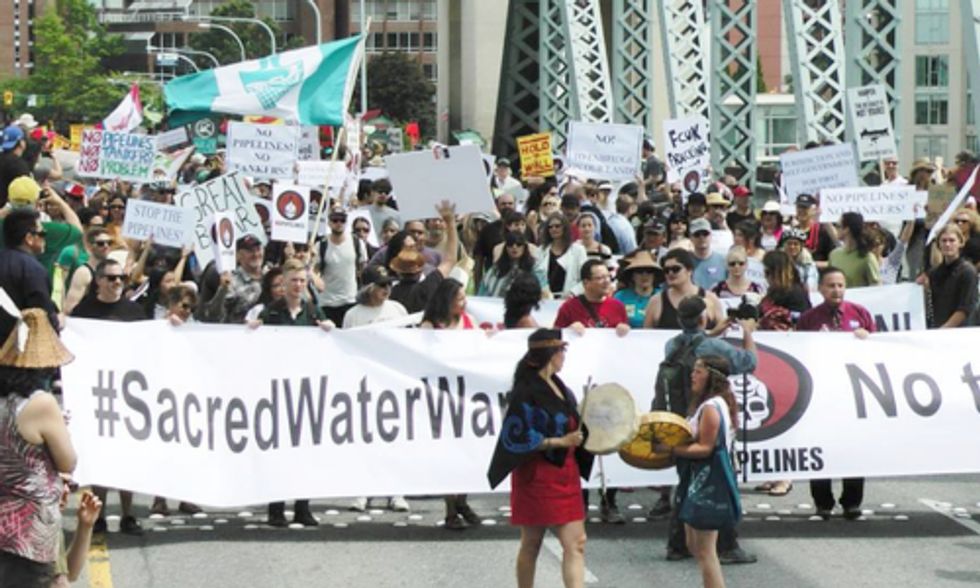 Council of Canadians activists joined with more than 1,000 others to protest the Northern Gateway pipeline in Vancouver, BC,  yesterday. The protest was organized by the Union of British Columbia Indian Chiefs and the Yinka Dene Alliance as the June 17 deadline approaches for a decision on the pipeline by the Harper government.

"It was an amazing rally! A crowd of over 1,000 gathered at Sunset Park and then marched across Burrard Bridge, taking over the whole bridge and closing it to traffic,” said Council of Canadians BC-Yukon organizer, Leila Darwish. “The march ended in Vanier Park, where folks gathered for several hours for a powerful and inspiring rally with incredible speakers.”

“It sent a strong message to the Harper and Clark governments that we will not jeopardize our children’s future for corporate profit and that the continued infringement of Aboriginal Title, Rights and Treaty Rights will not be tolerated," Darwish concluded.

The Vancouver Observer reports, "The Grand Chief and president of the Union of BC Indian Chiefs [Stewart Phillip] said the government's announcement on Northern Gateway could take place as early as [Monday June 9], or possibly on Thursday, June 12. He said on the day of the decision, there would be a gathering in front of the CBC [Canadian Broadcasting Corporation] studio in downtown Vancouver at 6 p.m."

Even if (when) the Harper government says "yes" to the Northern Gateway pipeline, CBC reports that it still faces various obstacles, "There are also the five applications before the Federal Court for judicial review of the federal panel recommendation, and further court challenges are likely."

The Council of Canadians opposes the Northern Gateway pipeline project, which involves two 1,200-kilometre underground pipelines. One pipeline would move 525,000 barrels a day of bitumen from Alberta’s tar sands to Kitimat on the coast of the Pacific Ocean (to then be transported on the ocean by 225 super tankers a year), the other would move 193,000 barrels a day of condensate, which is used to dilute the bitumen from the tar sands so that it can flow through the pipelines. It would facilitate a 30 percent expansion of the tar sands, this country's fastest growing source of greenhouse gas emissions. Last December, we signed a Solidarity Accord supporting the Save the Fraser Declaration which bans the pipeline and supertanker project, and all other similar projects, from the traditional territories of 130 First Nations.