1,000 Coloradans: 'Rejecting the TPP Is Most important Thing Congress Can Do' 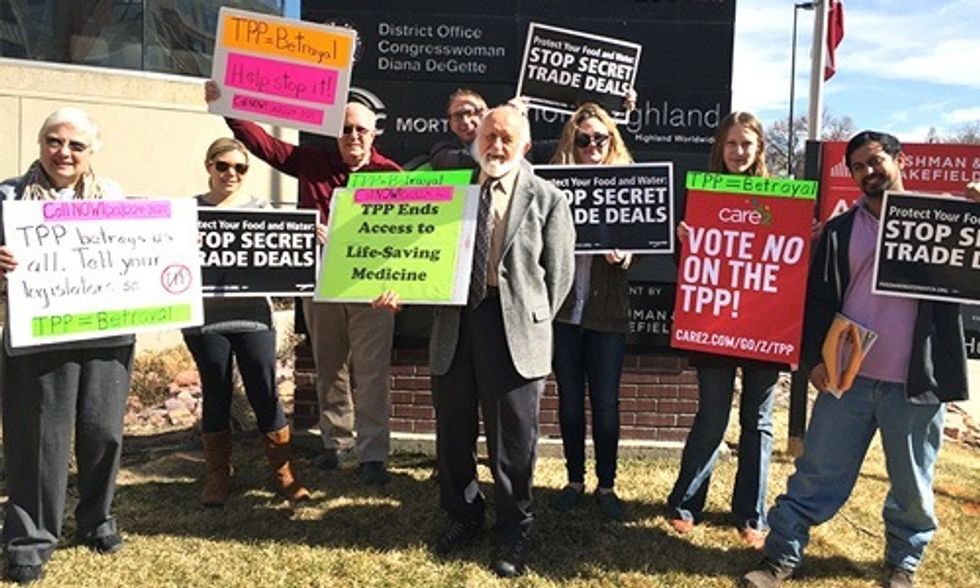 The TPP is a trade deal negotiated in secret for years by 12 countries, including the U.S. On Feb. 4, the U.S. and the leaders of the 11 other countries signed the text of the pact. Now a Congressional vote to confirm the deal is imminent. If passed, the TPP will trump commonsense protections for workers, the environment, public health and food safety.

The groups urged Rep. DeGette to commit to vote “No" on the TPP and uphold her long-standing reputation as a champion for Colorado's working families, environment and food safety protections.

This month, a new Tufts University study found that the TPP would eliminate 450,000 American jobs and widen the income gulf between working families and the economic elites. Further, Malaysia and Vietnam are included in the agreement, countries that pay pittance wages and have histories of labor and human rights abuses.

“Rejecting the Trans-Pacific Partnership is the most important thing Congress can do," said Dave Felice, political director for the Communication Workers of America, District 7. “This massive deal will destroy American jobs and our ability to protect the environment. Under the TPP, multinational corporations will take over our democratic government."

“We've already seen existing mega-trade deals undermine regulations that protect our food," Sam Schabacker, western region director with Food & Water Watch, said. “The TPP—which is like NAFTA on steroids—will further erode our vital food safety protections and give foreign corporations new powers to challenge laws that were put in place to make sure Coloradans can trust the food they are eating. Representative DeGette must vote 'no' on this terrible deal."

Even though it will have a significant impact on the day-to-day lives of Coloradans and all Americans, leaders negotiating the TPP kept members of Congress, governors, the media and the public entirely in the dark about the details for seven years. In contrast, hundreds of corporations and business trade associations had a seat at the table as designated “trade advisors" and inserted their own special interest giveaways into the TPP text.

"The TPP would empower over 9,000 foreign corporations to sue governments at all levels (national, state and local) in tribunals outside the U.S. court system if the corporations believed laws undermined their 'future profits,'" Carolyn Bninski of the Rocky Mountain Peace and Justice Center said.

“This provision of the TPP, called the Investor State Dispute Resolution, undermines sovereignty, democracy and the powers of states and local control. The TPP constitutes a huge transfer of power from the people to foreign corporations. This is completely unacceptable."

President Obama has identified the TPP as his legacy foreign policy goal and can submit this trade deal for Congress' approval at any time. Once the deal is submitted, Congress will have 90 legislative days to vote on the measure.

"By now politicians should have learned that supporting policies like the TPP that threaten Internet freedom is a great way to invoke the wrath of constituents from across the political spectrum," Evan Greer, campaign director of Fight for the Future, said.

“Policy that affects the Internet should never be made in secret and any member of Congress who votes in support of the TPP will become known as a supporter of censorship and an enemy of free speech."

6 Reasons Al Gore Believes 'We Will Prevail' in Climate Fight